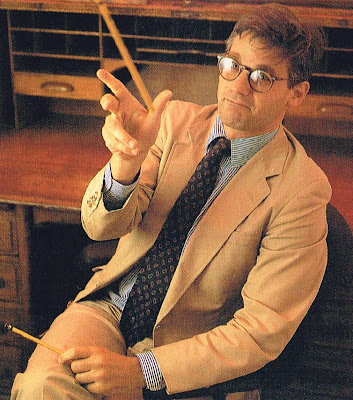 Peter Kaplan died of cancer Friday. He was 59.  A couple months ago,  I called him on his cell since he never answered his office phone.  He answered with a curious, "Hello?" I'm guessing because of the mysterious area code.

"Mr. Kaplan, this is John Tinseth and I don't mean to sand bag you on your cell, but I just wanted to let you know what was going on with the M book, and we're gonna make it an E book 'cause it was impossible to get in everything we wanted hard copy, and the proofs from the printer in China sucked, and we'd like to insert  filmed interviews in the E book with folks who knew and worked  on M, and since you wrote the last cover story, would you be interested in doing an interview?"

This was said at roughly the same speed and pentameter as Ralphie asking Santa for a Red Ryder  BB gun.  "Sure," Kaplan said,  "I'd be happy to help in any way that I can.  Just let me know when you wanna do it." Getting the firm order, I thanked him and said goodbye before he could change his mind and kick me down the slide. The second I hung up, that monumental exuberance, like a parachute opening, would change to paranoid dread as I wondered how I'd ever get Kaplan on the phone again, or,  if he even meant it.  This was New York City after all and people like Peter Kaplan had bigger fish to fry --  Little did I know what was going on...

From the NY Times obit, he had been diagnosed last Summer.  When I found out this morning, all I could think of, being the selfish asshole that I am, was what a gyp.  My first meeting with Kaplan was for a 3PM lunch in an Irish pub in April of 2012.

Dear John Tinseth,
Hi. We haven’t met—but I am a great fan of The Trad.
I would very much like to speak to you about M magazine and your new book—a topic of plenty of importance around here. Do you have time for a drink in the next couple of weeks?
Yours,
Peter Kaplan
Editorial Director
Fairchild Fashion Media

We were meeting in his building lobby and at the last minute I grabbed an Observer from a news stand and spread it out in front me while crossing my legs on a Barcelona ottoman while trying to look relaxed.

"John?" he said.  I lowered the paper and saw him smiling.  I stood up and offered my hand --  Just to shake, but from what I knew about Kaplan, it was a proposal as well.  He wanted to talk about M Magazine and the book.  I wanted to work for the mother fucker.  I folded the Observer and tossed it on the ottoman.  Kaplan frowned and pointed at the pink paper, "You're leaving the paper?" "That's not a paper anymore…" I whined, "it's classified ads for real estate."  Kaplan didn't laugh but I saw a small grin.

It's the only card I have.

Dear John I am so sorry. I have been out of the office a lot lately. Let us schedule a phone call. Peter

"Like the generals I worked for, our relationship was not intimate, but it was about love and that's why some people can lead and most of us can't."

That is some epitaph.

ML- Thanks. Most of the men in fashion media are not interesting. Which is why this hurts.

Oyster Guy- Soldiers have an understanding of what love is for their leaders. Sometimes it's just as simple as the men who saved their ass. Kaplan didn't save me but he tried to help me and I have no idea why -- Which is why I loved him.

I've been a fan of Kaplan's work for well over 20 years. I was shocked and saddened to hear of his passing. This piece is an outstanding tribute to the man and perfectly frames the image I've always had of him as I've divined from both his editorial pieces and the accounts of others who knew him well. Thank you.

Tin, it looks obvious to me why he wanted to help you, it's because "you get it." Most can't.

Being the selfish asshole that I am, I thought to MYself "he's gonna make me buy an e-reader now. And I'll do it, too."

But it does sound like Kaplan's passing is a big loss. What was his last article for M?

John, Another perfect set piece which, as usual, has something of you in it and a lot about what makes the other player in the narrative stand out. The Observer under Kaplan was cherry and this goes a long way to describing why. Wonderful writing.

Tintin, thanks for introducing me to an extraordinary man. In addition to what you shared above, I read the New York Observer story about him and his many contributions. Your love for him is very clear and understandable to me. My he rest in peace.

Thank you all for your comments. Ben, M's last issue was a cover story on David Letterman. I'll post it this week along with a piece he did on '50s TV for Esquire in the early '90s and I'll throw in a surprise that Clay Felker did on Peter.

There is a wonderful remembrance of Peter by NYO reporter and close friend, Phillip Weiss here: http://gawker.com/peter-kaplan-a-remembrance-1475013328

i stopped leaving comments here b/c every time i read a post like this, i correlate it to a pers exp of mine, which, i believe, does your writing a disservice. well, i used to think that. now i think that's testimony to the strength of your writing, that it compels the reader to at least find some analogous exp w/in their own purview.

just fucking loathe calling something that does this "good," or "great," so i'll just tell you it compelled me to draw from an analogous exp w/in my own purview, and, for that, i'm grateful.