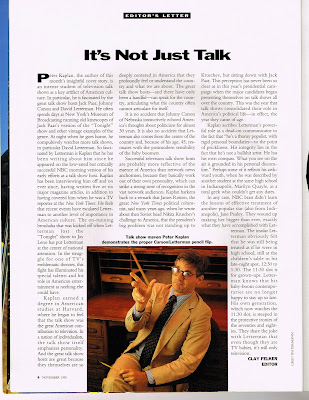 Peter Kaplan, who told me he had no idea, wrote the cover story for the last issue of M, or as it was known by 1992, 'M Inc.' Clay Felker, Kaplan's friend, mentor & editor of M Inc., praised the TV obsessed Kaplan for the piece he did on David Letterman.

In describing Letterman and his gritty honesty, I always thought Felker was describing Kaplan as well -- Like Warren Oates doing Sam Peckinpah in, 'Bring Me the Head of Alfredo Garcia.'
Posted by tintin at 20:17