Directed by Jonathan Demme and written by E. Max Frye. A flashback to my 1986. A story of change within change. 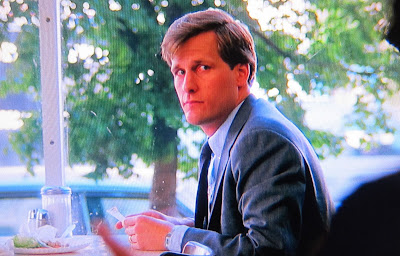 Charlie Driggs (Jeff Daniels) likes to spice up his life by sneaking out on restaurant tabs. I'm guessing Brooks Brothers 346, a pinpoint button down with extra starch (on a hanger) and Johnston & Murphy cap toes in British tan. 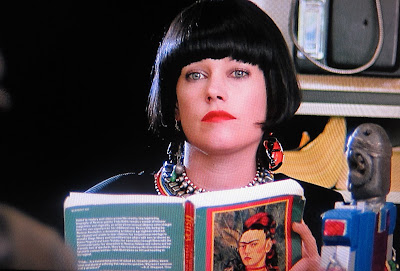 Audrey 'Lulu' Hankel (Melanie Griffith) is banging 12 on the koo-koo meter but in a good way. The way it was in 1986 when girls who were just a little crazy were something wild. E. Max got the idea for the film when he saw an ultra straight guy in a suit having a romantic lunch with a gal just like Lulu. 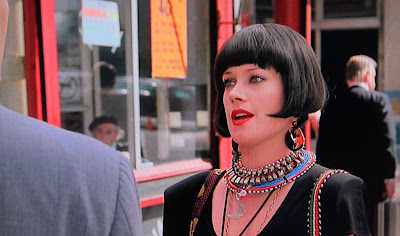 Lulu confronts Charlie outside the diner for his Dine & Dash. Then offers him a ride back to work. Uptown. She has a car. 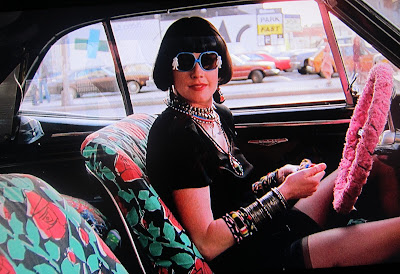 How can you say no? Instead of going uptown... 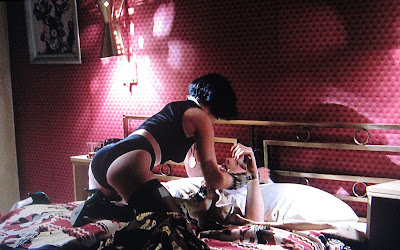 Lulu kidnaps Charlie and takes him to a NJ motel where she handcuffs him to the headboard... 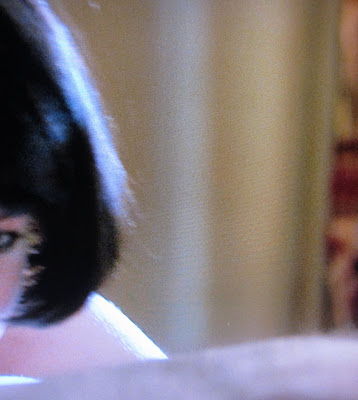 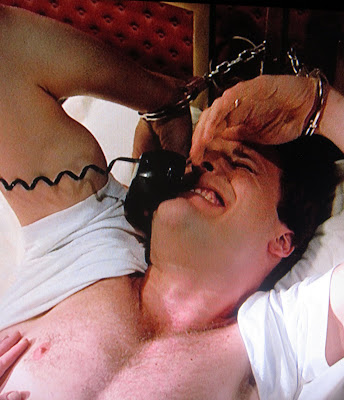 and putting him on the phone... 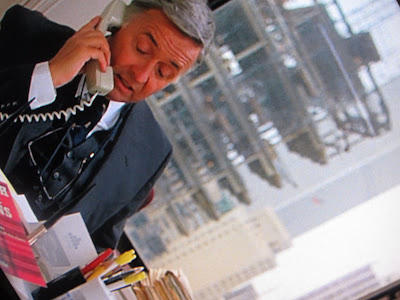 with his boss. "Yeah, I'm getting this down." 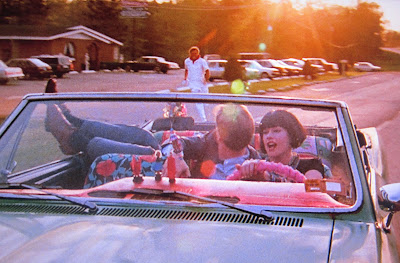 Later, Lulu and Charlie both do a dine & dash. 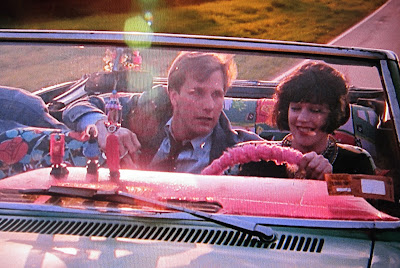 I've been looking for these seat covers for 25 years. 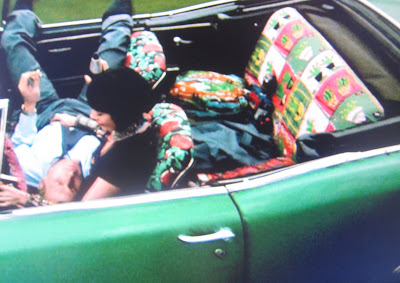 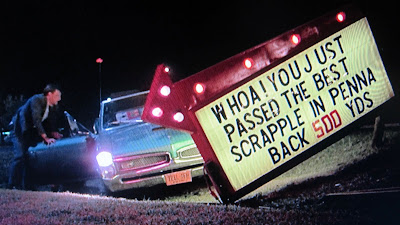 Lulu & Charlie stop off at another cheap motel... 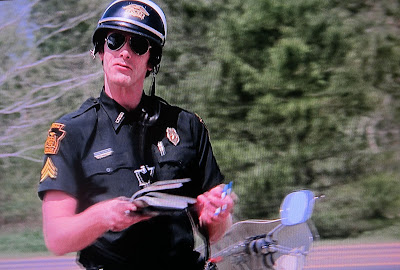 but have to give the car up when a cop (that's John Sayles behind those Ray Bans) asks if they own it. 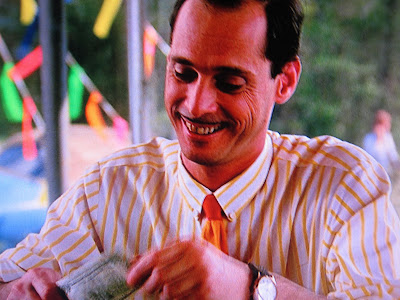 They cross the street to another cameo by John Waters as a used car salesman. That shirt is a perfect McNairy knock off. 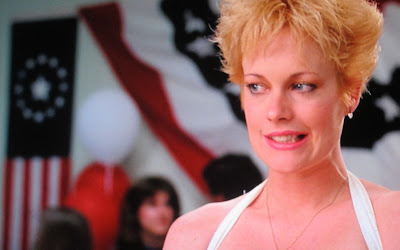 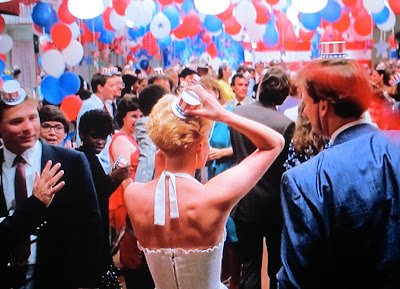 Where she introduces Charlie as 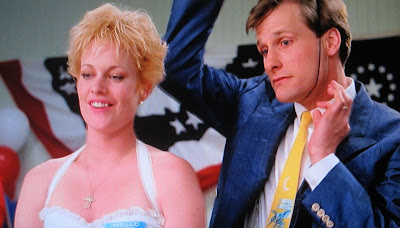 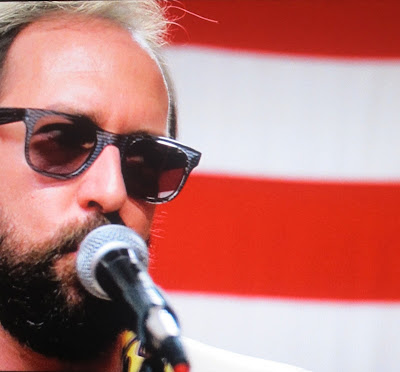 While the Feelies play 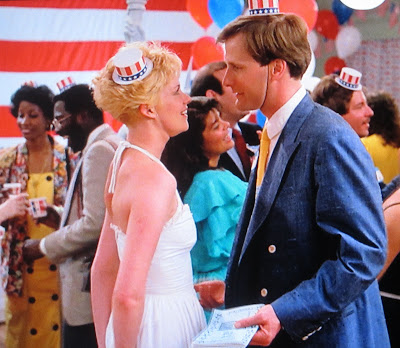 and I'm transported back to this wonderful time. Full of nostalgia and color... 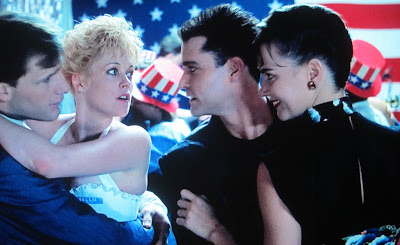 And it all changes when Ray Liotta appears.

Before CDs. Before cell phones. Before any responsibility of any kind. Something Wild made a huge impression on me. Like being hit in the head with a shovel. I loved it then and even more today through Criterion's Blu-Ray. An amazing soundtrack that I still have on cassette. It's different.
Posted by tintin at 12:37

Labels: A Man's Movie, Something Wild

I hear you on Something Wild but for me it was John Hughes' Sixteen Candles, Pretty in Pink, Breakfast Club and Ferris Bueller's Day Off. If I catch any of them on cable, I'm transported back to a more innocent age when I was teenager.

This explains quite a bit.
Sadly, at roughly the same time I was being inspired by License to Drive and Better Off Dead.

I love this movie!
Totally gonna add it to my netflix.
Have not seen it in YEARS.
During the 90s, it was a popular tv saturday afternoon feature for some reason.

Don't know why I remember it this way, but the OST seems to be where I found out about "juju" music, or was it zydeco? Can't recall. Or was that the movie with barkin and quaid...? Too many Natty Lites.

Brilliant movie. A much darker comedy that acted as a counter-point to John Hughes movies of the same period. Jeff Daniels is really talented and IMHO, one of America's great character actors. Did Melanie Griffith every do anything that matched her performance in this movie? And Ray Liotta? Pure, frightening menace in this movie!

Don't believe '80s movies.
the '70s would not die.
In real life she would have driven a duster and had Farrah hair.

down by law and stranger than paradise for me.


"its a sad and beautiful world."

Love a movie that gives scrapple a cameo

-For more information on Jeff Daniels and Michigan's thousands of miles of rocky windswept coastline, go to PureMichigan.org.

I was on deployment for most of 1986, and missed this one. I'll check it out.

Thinking back, that deployment was when our Air Det hosted the "John Cusak Film Festival" one holiday weekend.

How funny. Never thought anyone thought much of this movie, but you pretty much said it all for me. I must've seen three times in the theatre by myself. Never admitted it to my then girlfriend who was convinced I was seeing another woman...

I can't believe I lost the original soundtrack LP!

Yes, I saw this was coming out on Blu-Ray. After this divorce pushes through, I'm going to find me a Lulu. Hell, maybe I won't wait.

A lot of this was shot in Tallahassee, FL, and a pal of mine and his wife are in that party dance scene as extras!

Pivotal scene of the movie for me:
Coworker: "Nine months ago his wife takes the kids and runs off with the family dentist. If you ask me, it's the best thing that ever happened to Charles Driggs."
[Zoom in on Ray's face] Ray: "Yeah, I believe that."
Demme nails this slice of conversation like an anvil falling on your head, and somehow you know that Charlie is headed for trouble.

When I saw it in 1986 it made an impression on me. Funny, back then Lulu dressed and appeared edgy. Now every other 20-something in soon to be gentrified Brooklyn neighborhoods look like her. Today, the odd ones out are the Brooks Brothers, Lili Pulitzer or J. McLaughlin types.