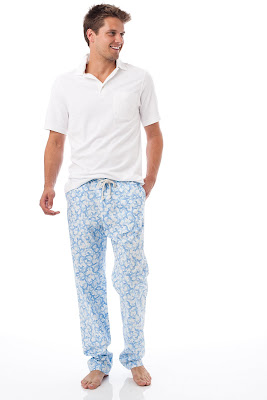 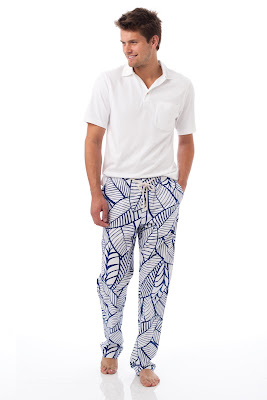 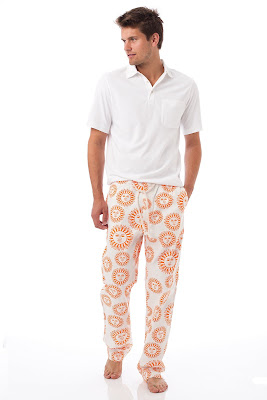 The Gilt article mentioned the J McLaughlin draw string beach pant ($125 a pair) but didn't include images. I'd like to recitfy that. I've been a fan of J Mac since the early '90s. Sensible men's apparel was always over shadowed by their women's clothing. Still, the men's line, while smaller, was no less powerful and I think made more so by its rarity outside the Northeast.

Quality rings true at J Mac and huge character follows second. However (the six letter, 'but'), I visited the men's shop on the UES and was told the infamous J Mac needlepoint was no more. Instead, there was lots of skull and crossbone stuff. Why would they do that?

The beach pant still rings true although why they didn't do a skull and bone version of that is beyond me. Maybe the designer called in sick because their second set of teeth were coming in. If you're an adult or have aspirations of being one, get a pair or these beach pants while you still can. Designers are getting younger and soon we'll all be wearing Winnie the Pooh.
Posted by tintin at 19:34

These I like, they remind me of a tradier version of something Quiksilver might do. BTW, I thought Andrea's previous comment was plenty amusing. Maybe something lost in translation, maybe Brits (Yes Minister types) would find it funnier? Just saying...

Oyster Guy- You mean this stuff?

Not sure I see what you see in Quicksilver or Andrea's comment. I do agree the Brits are at a loss for most of GTH even when Time, Place and Occasion are considered as evidenced here:

The vintage Lilly P worn among many Brits who are old friends (and some new friends) drew criticism of such fury that I felt inclined to wear them as often as I could.

Odd isn't it? So many cultures demand their food, clothing, wine, music, etc be embraced but when asked to embrace another culture they decline and consequently come off very provincial.

I prefer Zumbas. -They come in NFL licensed designs.

I hate speaking for other people but as I read it, the term "civil servant" might be better culturally translated in an American context as "nerdy accountant." When a Canadian or other descendant of the British Parliamentary system pokes fun at a "civil servant" we have something like the character of Bernard Woolley in mind: www.youtube.com/watch?v=Eikb2lX5xYE&feature=related. The implied criticism does not come from a place of entitlement or privilege, quite the reverse, it is the bark of an underdog. Ottawa, like D.C. is a city of civil servants who are only too happy to make light of themselves in a simultaneous display of modesty (only sometimes false) and genuine self confidence. I don't know Andrea obviously but I can't imagine any offense was intended. It is true that nails that stick out do tend to get hammered but it is not in classic Canadian character to make sport of the genuinely vulnerable or weak, only the strong. It's really a perverse form of respect. By contrast, the Brits will trash anyone and mean it. In this context of GTH, I just doubt she would have said anything knowing that it would hurt your feelings and that goes for me too. If you are insider enough to enjoy the smiles of GTH I would have also assumed you are impervious to the winces as well. Communicating with text on the net, I think it is just too hard to see the twinkle in the eye, smile on the face and feel the slap on the back and maybe even a pinch on the bottom that likely was intended.
As for GTH and the emotions it seems to have generated, with respect and affection, I think I (we?) "get it" bearing in mind wearing plaid is about as GTH as it gets in Canada. I wouldn't spend time here if I didn't love what you do and how you do it.

Another nice fact - most of J. McLaughlin's stuff is made in their Brooklyn factory, I think.

Thanks again, Oyster Guy. You can be my porte-parole any time.

I did wonder if the term civil servant is not used in the U.S.A. and that perhaps our host thought I was belittling servants.

Sorry Tin- the drawstring spooks me.. how are your GTH custom pants comin- i think someone needs to horn in on the GTh market, i need a pair and have no idea where to buy and mtm is outta my budget

The singular of pants is....pants
The singular of shorts is....shorts..
same with jeans. There is no item of clothing called "pant"...or "short" or "jean" for that matter.

"...second set of teeth were coming in." Hilarious!!

HAve your opinions, they are fine, and not that I wear GTH, but Bonobos does them well. GTH is pretty much what Bonobos started out to be.
http://www.bonobos.com/store/item/Pink_Medallion_Print_Washed_Chinos

Those young putz designers are the worst.

Back in NYC tonight.

These "draw string beach pants" remind me of the happily long-defunct International Male store in Los Angeles. They published the "Undergear" catalogue with all sorts of regrettable but highly amusing forms of underwear and casual togs: I googled the catalogue, which still exists, and found a similar "Seduku Riviera Mens Linen Pant [sic]." I presume all these pants would be appropriate for a cabana party in Palm Springs or Cherry Grove?

I LOVE the 2nd pair