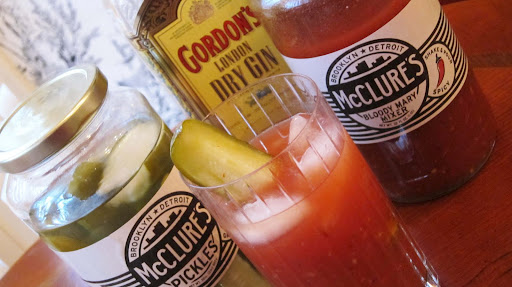 McClure's is out of Brooklyn. The Bloody mix ($10) and pickles ($9) are not cheap and not for everyone. They have a freshness and soul about them fitting for lazy Sunday brunches of challah French banana toast, lots of bacon, poached eggs with white truffle oil and the Beatles, Rubber Soul, playing in the background (I read Xaviera Hollander's, Happy Hooker when I was 16 while listening to Rubber Soul over and over. Norwegian Wood never fails to put me in a certain mood). 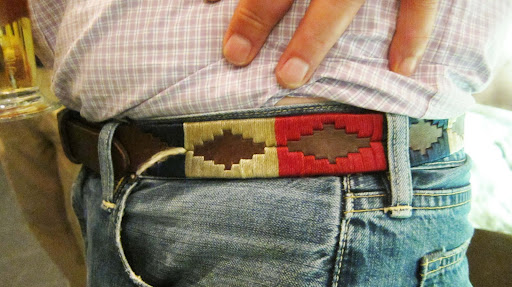 The guy wearing this belt says, 'Bloody' a lot. 'Bloody hell, he's a bloody wanker. Why is he taking a bloody picture of my bloody belt?' My English friends don't understand my blog and that's okay ('...why would he bloody do that?'). I asked Joe for a photo of his belt and he happily obliged. Horse hair from somewhere in South America. I've been looking for one without any luck. If anyone has any leads please email me.

So it's not my belt and it's not my Bloody Mary but they both have real soul. The unusual is always packed with character and courage in that the belt and mix are not made for masses, but for a small and appreciative audience. That's what brave people and companies do. You don't always have to be a prostitute. 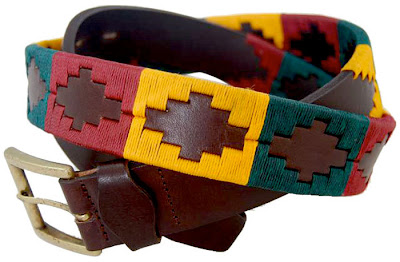 Update: It's called a Polo Belt and the source is here. At 30 pounds, it seems a steal and the company, Estribos, is located in Surrey and sells over the internet. Many thanks to the anonymous reader who sent the link. The belt above (Royal Dragoon Guards - 32 Pounds) is a Gaucho belt and available here. Not many sources but, happily, all are skull and crossbone free.
Posted by tintin at 10:09

My friend has the same belt in different colors. He got it in Argentina from a company called 'Cardon'. Don't think you can get one if you're not in Argentina, much to my chagrin.

I would have someone take a picture of my belt but even in pixel form it would be under such stress that it may snap and fling itself through the blogosphere shattering many pairs of Ray Bans.
Ivy but not Preppy.

Your Australian readers also appreciate the word 'bloody'. Reading your blog made me realise how long it's been since I've heard that: "He's a bloody wanker." Ahh, the things that make you homesick.

Goddamn Gordon's "Smoothest, Most Mixable" Gin too. You floor me, Tinseth.

I had a link for Polo belts, but I can't find it. Glad someone else is on the ball.

My current favorite is Zing Zang mix with Bloody Buddeez (pickled carrots and celery). Plus you can add a little of the pickling juice to give it some umph. Recently marketed as healthy, which normally turns me in the opposite direction.

Normally have it with vodka, so I'll have to give gin a try.

Come on up to Canada where we have an odd obsession with the Ceasar.

There's also a similar, but less well known drink called a Tijuana Whore, which includes a good shot of Tabasco. The theory being that, while great at the time, it's going to hurt to piss later.

Ahhh..the drink that tastes like a sandwich.....
I do not care for Bloddy's...but my Wife loves 'em so I fancy myself a fairly ggod creator...I think the pickles are a great idea...always works well...and their are several very fine mixes out there...just bang 'em up with extra horseradish and Tabasco...maybe a little garlic scraped over a zester...and remember....use quality ice....Sometimes I freese the mix in cubes and really impress the drinker...
Cool belt...and great book by the ever popular Ms. Hollander...

I wish I liked Bloody's.....such a classy drink!

Main Line Sportsman - Freezing the mix in cubes....that is an excellent idea.

More belts and other tack items on the cheap here.

FM Allen (fmallen.com) carries them too, or at least they have in the past. Don't see any on their website at the moment but could be worth a call.

I'd like to mention that while McClure's does indeed have a kitchen in Brooklyn, they really are "out of" Detroit. I have to put a plug in for my beloved Motor City whenever possible.

While it's true that McClure's operates a kitchen in Brooklyn as well, I believe they really are "out of" Detroit. Sorry, but I have to put a plug in for my beloved Motor City whenever possible.

Come to Buenos Aires, Argentina, you will get tired of seeing them everywhere.

Some stores that carry these kind of belts:

I prefer the "cinturones de cuero crudo". Look for them under this term at Google Image.

Hi there - I am an Aussie, journeying through the UK for a couple of weeks and have been watching this blog about the Polo Belts. Have looked at both the firms mentioned and the Estribos one looks more authentic but before I order one I would be grateful if anyone has had any dealings with them in the recent past and can give me any feedback. I have been caught out before and would not want to have a problem again. Thanks!

Anon- Have not ordered from either yet but am planning on trying both.