You Can Buy Me A Beer 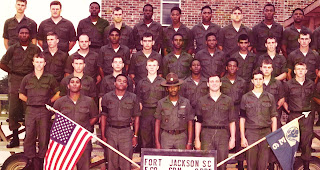 How do I get outta here?

The minute the photographer (maroon polyester sport coat & grey Sansabelts) triggered the shutter release, I turned to watch a car drive by. I remember wishing, in that exact moment, that I was in that car and leaving what was, up to that point in my life, the biggest mistake I ever made.  I like to tell folks who are curious about what the Army's like, "It's as close as you can get to being in jail."

Basic training started 37 years ago today.  Put another terrifying way...when I entered the service, 1940 was 36 years ago.  You always wore a uniform flying commercial...not because you were required to... but because some WWII  veteran would buy you a beer or two at the airport bar in Atlanta.  The saying back then was, if you die and go to Hell, you'll have a stop over in Atlanta.  I listened to their stories and I saw some eyes well up.  Like mine sometimes do... when I tell a story today.  Maybe that comes with being over 50.

Thoughts of the Army are complicated.  When watching the light show of tracer ball on a night range during basic training -- A moment of clarity dawned on me. I realized I could easily be on the receiving end.  Not the best motivation for an infantryman.  When starting any training, all I wanted to know was, "When is this over? What's the date?" As long as I had a date - you could shit on my head all you wanted - just so I knew I was leaving by a certain square on the calender.

What I loved? We were all in the same boat.  That's really what comradeship is all about...an equality of being screwed or what was called, "BOHICA." Bend Over Here It Comes Again. About the only place I feel a sharing of misery in civilian life is being stuck in traffic.

After a couple of years I started to happily settle into Army life.  But mysteries persisted.  I knew highly honorable and ethical men...who slept with their best friend's wives. There was this law that you didn't plank another soldier's wife but 'horny' always seemed to get in the way.  Consequently, Army life was a huge soap opera with loads of messy divorces and spousal abuse...on both sides. A man I worked with, the incomparably cool, Sergeant Knight, would come to work with cuts and bruises. He would tell us he fell, he cut himself, he tripped...One day he disappeared and we would learn his wife, who was the origin of his many injuries, almost killed him.

I heard nightmares of Vietnam veterans in the field.  It got to the point where you heard the screaming, knew what it was and rolled over under a mosquito bar... giving it no more thought than what was for breakfast.  What I can see now, not then, but now...we were all part of a thing bigger than ourselves.  You took the good with the bad but in the end...we were contributing to something important. It's hard to feel the same way about selling insurance.

Yes sir! I would do it again and again. No greater camaraderie, excitement or sense of purpose.

Huh. Somehow seeing you were terribly handsome adds something to the dialogue.

Have you ever written about being handsome? Do men EVER talk about it? Women do, all the time.

Glad I did, glad I never have to again - is so true. It's hard to explain to the current generation how close you can become to your buddies during boot camp. They don't get the swearing, the theory of breaking down and building up again as a unit. They even train with women. Sorry, you don't bond with a woman the same way you do with men. Brave new world.

"Basic training started 37 years ago today. Put another terrifying way...when I entered the service, 1940 was 36 years ago."

I'm always playing those math head games with my age and experiences. Drives me nuts, sometimes. It just goes too fast.

DB - that's affirmative
LPC - Women talk about how beautiful other women are as if to suggest they are not as good looking. Men on the other hand are less affected. I am one handsome moe foe, married a bombshell, get more looks from the men than women walking down 5th Ave....so my wife tells me. Yes, Tin is a handsome cat....and I ain't dry sniping his booty!

You struck a chord. I did basic E-1 at Fort Dix right after Dartmouth and I loved the guys in my unit as much as the bros at Chi Phi. Fortunately served between Korea and Viet Nam.