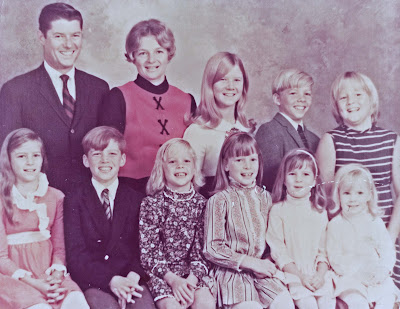 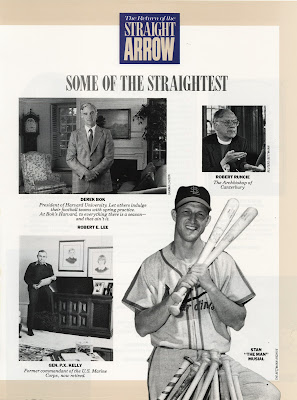 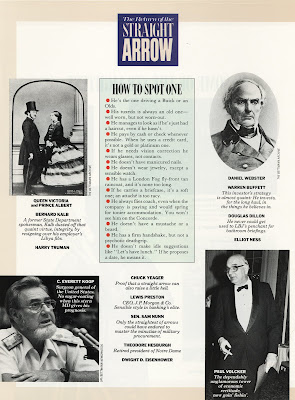 I meet my first Straight Arrow in Chicago. We were working on the same 'account' team and he was running it. Not that he'd ever point that out. He was everything on that list up there - - even the Buick. Always a Buick. And he came from more money than God.

I never heard him utter a bad word about anyone except a co-worker who tried to steal an account of his. When she quit, the company threw a party...to celebrate her leaving. So she didn't really count. I sat next to him at a black tie event and noticed he was wearing a belt with a monogrammed Tiffany buckle. "Huh?" I thought. That's odd. No cummerbund. And then I realized he was wearing black trousers with belt loops. I later learned his tuxedo trousers had worn out years ago but the jacket was perfectly fine and for him - so was this arrangement. He pulled it off with an old-money panache that was all his own.

We traveled together often and I could not walk through an airport without him running into a cousin. Sometimes two. He was from a large Irish Catholic family and when a friend pointed out the North Shore house he grew up in... I remarked it looked like a private college in Vermont. You don't meet a lot of Straight Arrows in life. But it's something to aspire to. I may be getting old but that new Buick Lacrosse looks pretty damned good.
Posted by tintin at 08:17

Please let me know if you need passes to a PGA tourney. Lordy.

It is a great thing when you meet a SA. If you ever do these days.

And I agree about the LaCrosse..the NYT piece this morning looked great. Where I am people may think its a Maserati.

The guy in the top photo is workin' an early Ronald Reagan thing. Straight arrow? Midwest? Irish Catholic? That WAS Reagan.

Man, I thought I would be the only one who thinks the Buick Lacrosse is sweet. Whew, what a relief! I was just on their site looking at the 2010 model overview. I AM getting old. Or, maybe Buick is designing for younger buyers? Nah, just for more hip boomers. Because, after all, many are now in their mid-sixties. And Detroit is hurting, hurting, hurting.

Damn. Reminds me of me.

SAs are a rare breed these days. The Lacrosse looks half way decent because Buick copied design elements from a BMW and a Lexus. It's not a great original design, it's just a melding of the best bits from others. It looks good because it's such a departure from the crap they produced previously.

Blushing- I'd prefer tkts to the Ladies PGA.

M Lane- Nice car although I liked the 2007 Lacrosse as well. In tan no less.

DB- We are getting old.

ADG- From the man with the rings and Concorde ephemera.

Anon- I really liked the '07 Lacrosse. 1st saw it in Chicago with the 910 N Lakeshore Dr building behind it. Fell in love with the lines, the length and the tan paint. To this day I'm not sure why.

Man do I miss M: The Civilized Man!!! I remember seeing that pic of PX Kelly before. Showing off his Sousa records I believe. Only a straight arrow would be so impassioned about Sousa!

Tinear....you left out my bracelets.

bmack- I have it from '84 thru '92 with some blanks I'm trying to fill in. M along with issues of Esquire in the late 50's to the mid 60's really make up an amazing reference library for traditions of another time.

I recently met a couple editors from that time period. One's a thumping bore and the other is an amazing man of wit, erudition and teller of some of the best stories about Pan Am stewardesses in the early 60's you'd ever want to hear.

Tintin,
I am acquainted with Eisenhower's second cousin. Besides being the former prez's doppelganger, he epitomizes the SA list of qualities. D

I missed that article back when.

I've shaken hands with Archibishop Runcie when he visited my prep school, P.X. Kelley when he spoke at one of those security conferences in D.C., and Father Hesburgh when he was eating a calzone in the student center basement at N.D.

I like the Lacrosse too and am glad to here it is because Buick is doing something right and not that I am getting older.

tintin-I have collected a few myself, namely the first issue and a couple more. The bulk of my collection was lost in college. I thought M was very witty. Especially enjoyed their terminology, "the serious wing-tip." I thought their taste in women was awesome as well, beauties like Catherine Oxenberg, a young Helena Bonham Carter, Greta Scacchi. They beat out Megan Fox anytime.