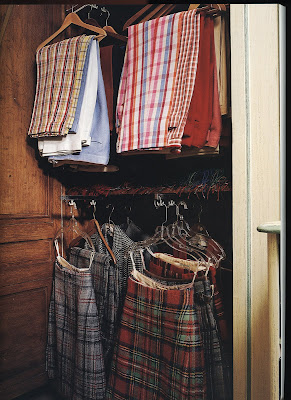 Hard to believe the Duke was pressed for room in his closet but there you go. Three... maybe four pair of trousers on one hanger. Although, those kilts are taking up a lot valuable hanging space.

I have a love of GTH pants. That's what I called them until I was corrected in London. "They're trousers, mate. Never pants." But Go To Hell trousers just doesn't sing like Go To Hell Pants. Not to me. They were also called 'Jack Ass Pants' when I was in college. Probably a more apt description of my wearing them.

The Duke was an avid golfer. Consequently, there's some golf related lots in the auction. Couple sets of clubs. What is it about old golf clubs always looking like crap? They just don't patina very well. And there are some odd lots of golf caps. Most of them look like they could be purchased today at any pro shop. One Lacoste bucket hat looks like it came with a free bowelbowl of soup.

I hope this blog does for you what the Duke's closet has done for me. To expose you to articles of clothing you may never have considered. Hey, you may have even said, "Not in a million years." But when you see it - - and you see it a lot - - like those GTH pants...they're not so bizarre anymore. Especially if you see them in Palm Beach where they're worn with style and strangely enough...restraint. Fortunately, I didn't see a Bolo tie in the catalog.
Posted by tintin at 08:36

I believe you mean 'bowl of soup'. I'm not taking a 'bowel of soup' from anyone no matter how good the price may be.

Anon- Thank you. Correction made. I guess I was thinking about the Tripe at Vo Door.

The kilts are Balmoral on the left and Royal Stewart on the right. In my opinion the Balmoral is a little cheeky, given the circumstances. I was given to understand that the late Queen Mother had him banned from there.

Thanks for sharing these shots Tin Tin.

It looks like he has an entire shelf of scarves up there as well. Impressive.

I tried finding a copy of the catalogs but am hard pressed to get below $125.

Scott - The catalog describes the Balmoral kilt as, "A Chalmers of Oban Balmoral tartan kilt with tailors label marked H.R.H. The Duke of Windsor 12.5.38. Interesting timing.

Chris- Keep checking. It took a couple tries before I found mine. Also check ebay. You never know.

I didn't think bowel was a typo. I thought it was pretty funny.

Tinfour...I betcha he had Bolo ties somewhere in all of that kit.

Always trousers...never pants. Otherwise the English giggle thinking that you are speaking of women's undergarments.

My husband wears GTH trousers. I think it's a good look.

As far as I know, the Sovereign has to give one permission to wear the Balmoral Estate tartan. The Royal Stewart tartan, and the Government or Black Watch tartan, maybe be worn by all those of British ancestry. I had the pleasure of growing up playing in a competitive pipe band in Connecticut and my kilt was my first bespoke item of clothing. Almost twenty years later, through youthful transgressions, alterations, multiple cleanings, and normal wear and tear, it still looks as new as the day it was first donned.