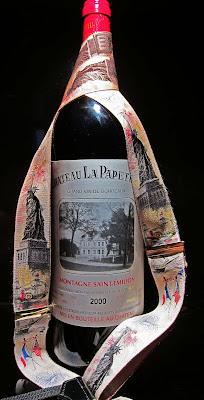 I know. This post should be a Pinot Noir with a turkey belt from Stafford but I didn't order it in time. Still, Thanksgiving reminds me of the 4th. There's no connection to religion. Everybody can celebrate. It's fairly simple and there's no gifts. You ask me -- we need more holidays like Thanksgiving and Independence day.

The 2000 Bordeaux are drinking nicely...when you can find 'em. I bought all the 2000 I could find under $15 this year. It seems to be disappearing but larger formats like this magnum are still around. It's not that it's an expensive wine. It's not. But it's a great year. Most likely it will be consumed this Saturday at a Thanksgiving / Birthday party. Or, I may put out the Greg Norman Cabernet Merlot. It's a 2007. Yeah, you guys don't want some old wine from 2000. You deserve the new wine. There's not so much dust on it.

There is some dust on the those braces. I remember buying those at Britches of Georgetown thinking they would be perfect for Independence Day. Of course, I never wore them on Independence Day because I had the day off. Still, I wore them a lot. I liked to wear them in London where they generated a lot of disdain from the Brits who hate most things French. They refuse to say French cuff and call it a double cuff instead. They did like French wine though. I don't think they ever had a problem saying that.
Posted by tintin at 05:44

Especially if you were paying. Love the braces. I think I saw them in a Britches ad once.

Have a great weekend!

Tintin,
Hope you had great Thanksgiving. Be thankful you didn't have to eat my turkey, it was like the Sahara Desert. BTW, there was an article/review about the creator of Tintin in the Washington Post Book World section on Wednesday by Michael Dirda. Check it out. D

M Lane- I'll see if The Door has any magnums.

D - As you would probably guess - I'm a ham guy. I do like turkey but only on dark rye with emmenthaler swiss, ripe tomato, a little lettuce and a smear of Roland French mustard. Warren Zevon was right- life really is about the good sandwiches.

Anon- Reruns are best left to daytime televsion and ADG.

You can't just buy a turkey belt from SoT; you have to earn it.

Sitting in south GA pine woods come springtime swatting gnats and fighting a fanged Old Crow hangover while looking to put a 3" shell into Tom's neck is a start.

Stewart- Come Spring? We do that in NYC every Sunday morning. In Philadelphia (Killy), they do it everyday.

Don't listen to the the butcher... Cut of your gib is not only precise, it's doled out in eastern euro grandma portions.