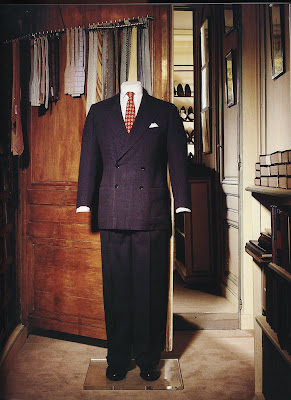 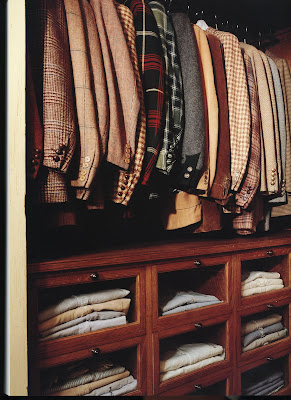 I try to keep my other blog separate from The Trad but did want to share something on Veteran's Day. You can see it here.

There were many influences on my southern sartorial upbringing. A golf pro cousin in Hilton Head. The Cowan's Ford Country Club on Lake Norman. Chapel Hill. The Ft Monroe Officer's Club. But nothing comes close to the effect my enlistment in the army had. Your appearance was everything and rarely did a good soldier dress like Joe Shit the Rag Man... although I was a good example of a poor soldier dressing well.
The Duke was a soldier, sailor and airman. Certainly there was an affection for uniforms but this love of the cloth -- and of the very best military tailoring -- must have influenced him for the rest of his life. Tailoring in my army consisted of $10 to the cleaners for pegged trousers and buying jackets one size smaller. I guess you have to start somewhere.
Posted by tintin at 08:25

Thank you for your service to our country, and keep up the post on the Duke they have been great

Thank you for the service you gave. I am really loving these posts on the Duke.

I'm with Brian. Thank you for your bravery and your service. It is truly appreciate and what you have done for this country will not be taken for granted. Cheers Tintin.

Great pictures of the Duke's closet - how many other shots are there?

An amazing array of jackets. And that dresser/case is absolutely brill. This is perhaps the one photo that stands out in my memory from this catalog. This, and the one of the shoes.

Brian- Was just in Wright & Simon in downtown Wilmington. Duke of Win quality? No. But good enough for me. Great shop and the owner, Leonard is great as well. If you haven't been -- you must.

Keith- Thanks. You do know we're not talking about John Wayne..?

LAS- You're kicking ass and taking names over at your blog. I'm proud of you. And bravery doesn't figure into drinking beer and jumping outta planes. Well, maybe just the drinking beer part.

DAM - Don't salute me. While I was in the army I worked for a living. If you don't get that -- don't worry. More of the Duke to come. Stop by this weekend. Not that the Duke would be able to discern a weekend from a weekday.

HTJ- THat closet is a favorite image of mine as well. The shoes go up this Sunday. Did not see any horse.

We saw the Duchess's wardrobe on display a few years back in Baltimore. Man, she was one tiny wisp of a woman. All those transatlantic crossings and fetes couldn't put any weight on her? A shame. It just seemed to suck all the glamour and sexiness out of her image. Maybe you had to see her in her clothing, but I'll take an athletic, vitamin and nutrition raised American woman any day. Wait, she WAS an American! Hmm...

Tin....Get Windsor Revisited if you don't have it. Written by the Duke...tons of sartorial pearls in it.

That's what my closet is lacking, a full size mannequin. And those great shirt drawers with the glass fronts. Oh yeah, and that completely custom wardrobe.

Is it me or do those socks look to be mid-calf?!