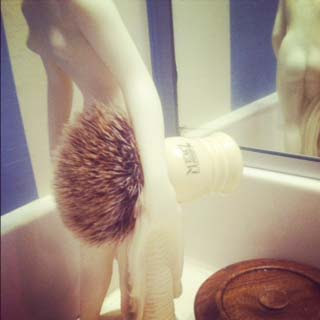 It looks like she has Buckwheat in a leg lock

Badger pubic hair, and underarm hair as well, are used to make shaving brushes.  Most of the hair comes from China where Badger is a popular dish.  The best Badger brushes are made in the UK where anachronisms make for viable business. And a brush shave, like the Yardley ad says, is still the best shave in the world. The best pubic hair for your shaving brush is mostly white/silver tipped.  The darker the hair the poorer the quality.  Is that because the older gray haired Badgers have softer pubic hair than the younger and more coarse Badgers?  Could be.  I'm old enough to know I'd leave "Fuck" out of a book title. 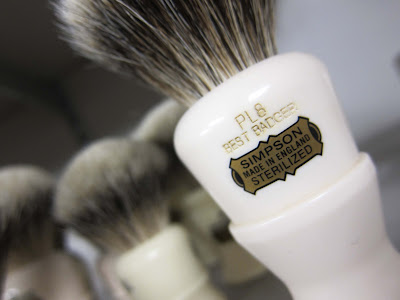 Something -  fuck yeah coarse - will set you back $50 or so.  Hair that's almost black belongs to a brush that bristles crudely against the skin and lacks the essential elegance that comes with wisdom, maturity and good taste. It's referred to, ironically, as 'Pure.'

'Best' Badger looks like a Goth girl's hair on Sunday morning.  Streaked in black and gray, it feels like a well traveled 50 year old man who eats and drinks too much.  Soft, warm and usually compliant...$150 - $200.

Finally, there's the snow haired old man known as 'Super' Badger. Look for Spencer Tracy gray. This is the best of the best and, like an AR15,  who knows how much longer it'll be around.  Costing between $300 and $400, the sting of price is offset by a lifetime's service. Most high end makers offer free repairs should you miss your shaving cup and dunk your brush in a tumbler of Scotch.

My father taught me to shave with his old brush and safety razor. Both now are lost to time and I wish I still had them. Did all of the safety razors make that funny little squeak-squeak noise when opening and closing the 'doors'? ....and, what did the military give you guys to shave with?

When I first heard about the Brazilian Blowout, I asked "Why would women want that hair blown-dried straight?"

Makaga- Sorry for taking so long to get back to you. My safety razor doesn't make that noise but it's not that old. Three or four years now. The army didn't give us anything to shave. In basic, they gave us a "flying" $20 and marched us to a trailer PX where we bought our three S's.

Rich- I'm still having trouble figuring out what a Brazilian Blow out is.