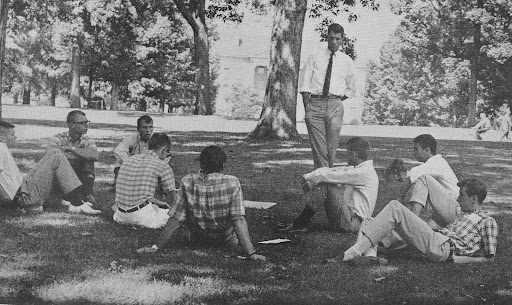 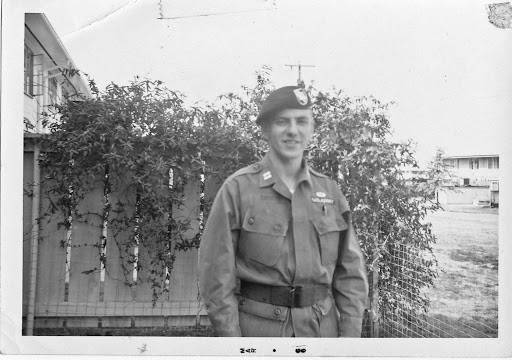 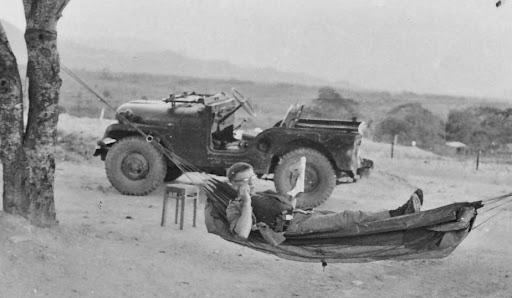 Written earlier for my blog, "I'm Here to Leave." For a new Army Brat friend.


I remember my father coming home but rarely his leaving. Except once.


We took him to Pope Air Force Base. A short drive from our quarters. He kissed my two sisters goodbye. He kissed my mother goodbye. He turned to me, poked my chest with his finger and said, "You screw up once while I'm gone and I'll come back and kick your ass. You got that?" I nodded and he turned and walked away to Vietnam. I watched him swagger to a C 130 with a duffel bag on his shoulder, his green beret cocked at an angle.

Had he not come home -- That would've been my last memory of him.


I'm not sure any eight year old would understand him. I did. A little. I expected to be treated like a man when he said goodbye. We spent a lot of time with each other the year before he left. Racing slot cars at  Hay Hobby Shop. Riding in his Berkley at local SCCA events. Taking his dare and eating a sardine he held out as raw fish. He was never chatty but we had our moments. Now he was gone and I felt ease settle over our house on Sunchon Street.

The move to Chapel Hill took the ease and put it on an island in the Caribbean with palm trees, coconut drinks and ocean breezes. Everything about Ft Bragg disappeared and I saw that civilian life was not the pawn shops, strip joints, car lots and bars I saw on the other side of the main gate. The University of North Carolina looked like a giant officer's club and Carolina blue became my favorite color. I went into the record shops downtown where my mother picked out the latest Herb Albert and Tijuana Brass album and I lusted for Beatle's 45s with the yellow and red Capitol label.

I was enrolled in my first Catholic school in June but had three months of summer when we moved into a house in the country. Older grad students and faculty lived in the same small houses tucked away in the woods with long drive ways and a concrete storm pipe at the beginning of each. By the end of the summer I had crawled through every one.

There was an art class I attended with my sister. A student lived in an apartment in an old house on campus and gave classes in the back yard. We sat around a subject and plopped water colors on the spongy paper while the sun looked down on us. Color was everywhere. In the red brick of the campus buildings, the white of clap board houses and the green of pines everywhere.

And in 1966, there was khaki and madras as well. High water trousers, white socks and crew cuts were still in vogue although longer hair was growing in popularity with the Beatles. There was also talk of the Rolling Stones but they were associated with hoodlums and communists.

Our next door neighbor was in dental school. He was married and had a little boy who liked to drop rocks on toads and poke a wasp nest with a stick. The future dentist also had a Mustang convertible and a color tv where we all watched Cinderella. I thought it was a terrible waste of color.

Farther up the street were a Canadian couple who had a white Volvo 1800 and a West Highland Terrier named Donald Bane. He was getting his doctorate and she had her masters. He had something to do with English lit and I remember they were always laughing... a trait I associate with most Canadians today.

Behind us was a preacher going to Duke for his doctorate in something biblical. I never remember him laughing but his son and daughter were good friends and I told my first story on their door stoop. It was about the secret life of their cat. Gerald believed every word. The next day he told me his father said I had made it all up. I admitted I had and his sister asked me to make up another story. I did but it wasn't funny.

The drama teacher who had a parcel of kids and knew the writer Paul Green personally was the coolest dad. With longish hair turning grey at the the temples, he was a writer, an actor and looked like a cross between Peter Lawford and Johnny Carson. My mother only allowed tv on weekends and I remember Friday nights where all the parents got together for a party (except the preacher) and all of us kids were put in a house with a baby sitter, the Monkees on tv and a dozen hot dogs from a nearby drive in.

I wonder if it wasn't too much too soon. I was a successful story teller. I had access to sports cars, actors and color tv. I lived a Town and Country life. Campus book stores and record shops. Swinging on a massive vine in the woods. Pondering colors and shapes as I painted.  Life was good and one day I was met at the door of my house by a sunburned man wearing a madras short sleeve shirt and a sun bleached crew cut...high and tight.
Posted by tintin at 12:22

I loved this post the first time and its even better now. Thanks for putting it back up.

Great story. Thanks for sharing Tin.

Aside from PJ Wodehouse, what have you been reading lately? Anything noteworthy?

You told me that line from your dad over beers when we first met. As a father I understand what he said and why. It was his job.I have that job now too. Perhaps tempered with a wink or a "noogy" or even a hug...it would have taken a better seat.
I say stuff like that to my son now and hear your words as I say mine.Then I give the hug....and I ain't leaving for 'Nam....just for a weekend.

One of my favorites. I like both versions almost equally, this newer one a little better.

Perfect, love this to bits, above all that Cinderella was a waste of colour. Did a line ever sum up an arty, artless lad so perfectly?
This saturated shot of character and place has taken me away from a dank November morning.
Nice one Cyril.

I don't know what I hated more when Dad was deployed -- the liminality of waiting to be a whole family again while he was away, or the awkward phase when he got back when we were all strangers-but-not-strangers, if that makes any sense.

Thanks for posting. It's good to know I'm not alone.