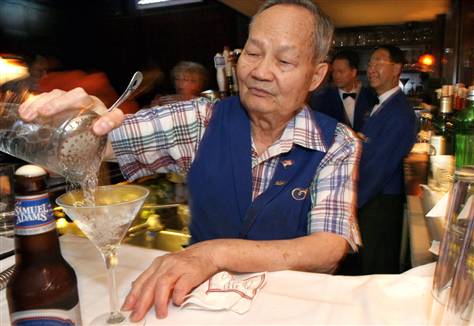 Mr Hoy made my first NYC martini (Beefeater up with olives-very dry) in 1984 after my first job interview (20th Century Fox). We told each other lies about our years in the Army. Me leaning towards him on my bar stool lighting another Marlboro. Mr Hoy leaning into his corner where the bar turned. I didn't get the job and didn't see Mr Hoy again for years. 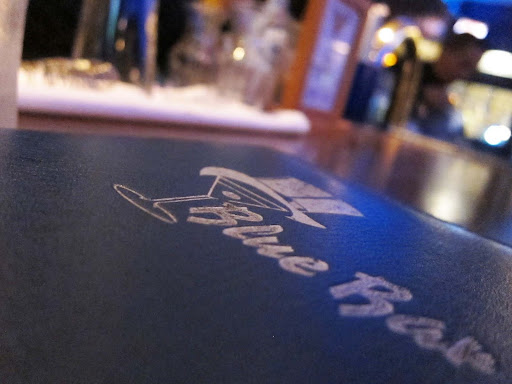 In 1990, my job was to entertain - mostly Brits - mostly in Chicago - sometimes in NYC- always with O.P.M. (Other People's Money). I returned to the Blue Bar and Mr Hoy. I told Hoy, "You made my first martini in NY and we told each other lies about the army." "Yes, I think I remember you." I said, "You're full of shit, Mr Hoy." And he laughed. 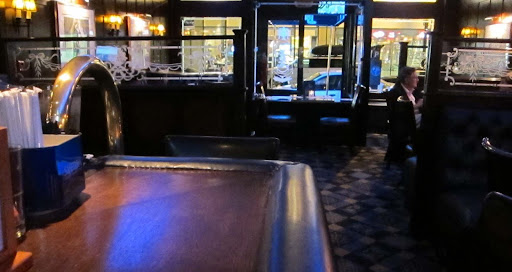 I went back to see Mr Hoy with increasing frequency. Late afternoons it was dead and we could talk. Other times, usually late at night, things could get strange. One night a man and his wife asked me to join them in their room. Another night I realized I was buying drinks for a hooker. 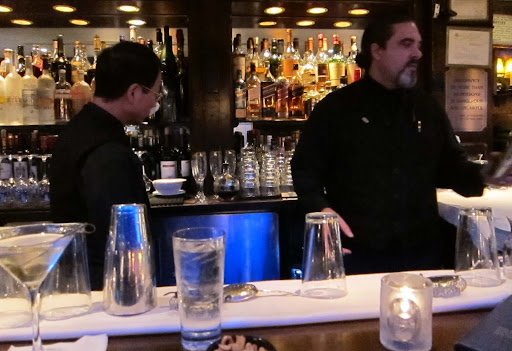 Mr Hoy was celebrated in 2006 as the oldest working bartender in NYC. He was 90. He claimed to still remember me whenever I stopped in. Now I was a New Yorker. And if I was ever a pain in Mr Hoy's fourth point of contact - and I'm sure I was - he never showed it. I took my seat at the bar, saw his smile and felt a warmth overcome me before the first sip of gin. 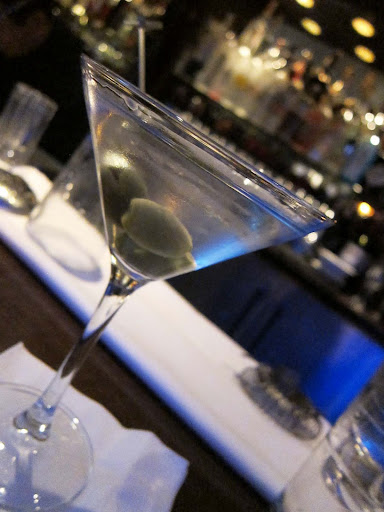 I stopped by recently. The lobby was packed but the bar empty. I sat on a stool, ordered a Beefeater martini and watched the Yankees with the bartenders. I asked a bartender how Mr Hoy was doing in his recent retirement. "Oh, Mr Hoy passed away a couple of months ago." "Shit." I said. "Yeah." he said. I stared at my martini. Lost in the memories of my ass on this very bar stool with Mr Hoy across from me. 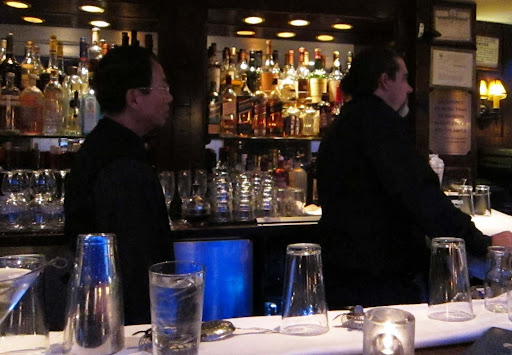 I saw the familiar julep strainer on the bar in front of me and while the bartenders watched the game, I reached over, picked the strainer up, put it in my pocket and placed a twenty dollar bill where it had been. I asked for my bill, charged it (I wanted a record ) and put a tip on it as well. "Thanks." I said and climbed off the stool. 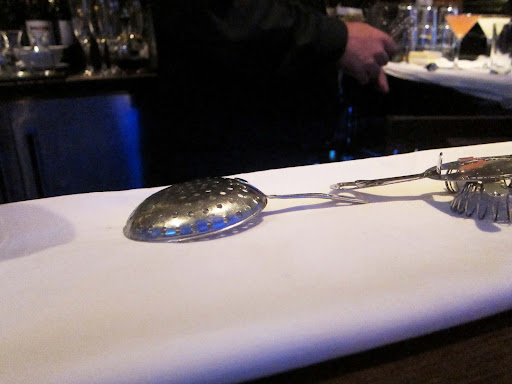 The bartender looked at the twenty on the bar, picked up the check folder and gave it a glance and looked at me surprised. "Thanks." he said. "No. Thank you." I said and left. I don't know how old my strainer is. I don't know how many martinis were made with it. I don't know a lot of things about it. I only know where it came from and what it did. 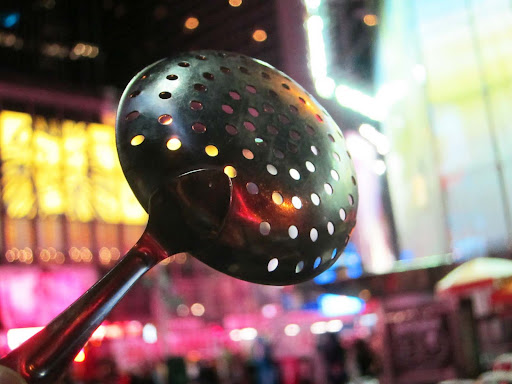 I took a walk and knew in my liver Mr Hoy was with me. Strolling Time's Square, an area I usually detest. 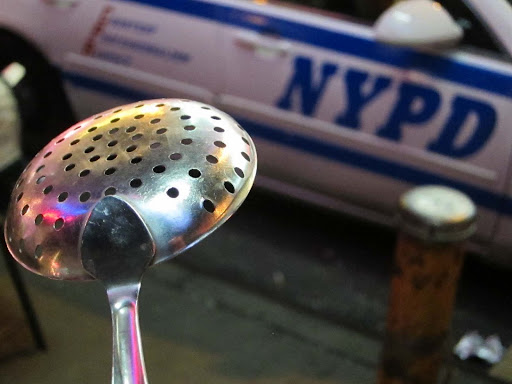 But something was different that night. 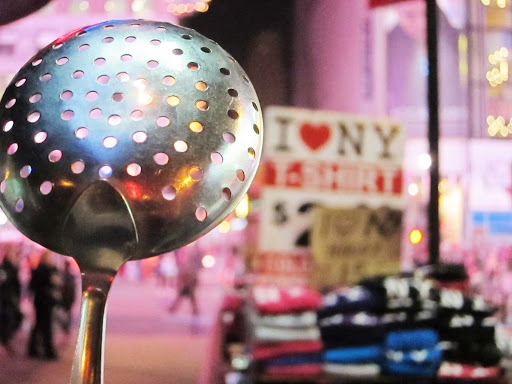 Everything was bright for my token. For some strange reason I felt I had to photograph it. Unless I lost it or a bartender chased me down and demanded it back. 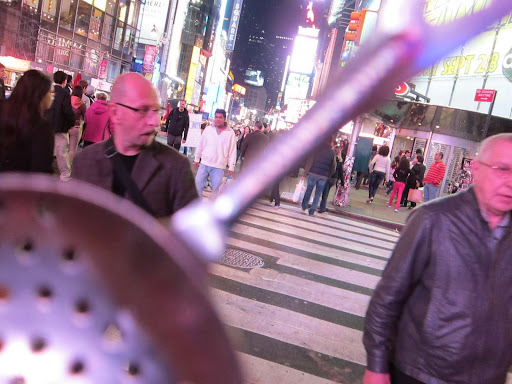 A small wake in the city for a man I barely knew but whom I always felt connected to. 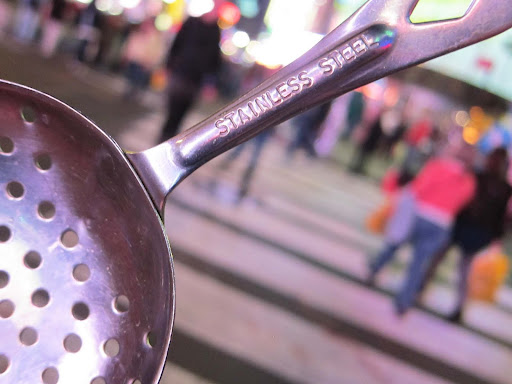 I think of all the connections Mr Hoy made with a spoon full of holes. "Yes, I'll always remember you."
Posted by tintin at 06:28

What a great post. Another fine barman gone. It was only right that the spoon should continue with someone that really appreciated Mr. Hoy.

Wow, I hope someone remembers me like that . . . DMW

As always, a fascinating account by an awesome author... Very classy, your choice of Brit Beefeater gin for your very dry martini (with 2 olives in proper glassware). Touching, your decision to take Mr. Hoy's strainer (and him) with you by a fair monetary trade with the young, uncaring bartenders. Pure photographic artistry, how Mr. Hoy's stainless steel strainer becomes a living object, we seem to identify with the back of his "head" as he observes Times Square, NYPD cop car and crowd -- was he (or you) afraid of being chased down and caught?

Maybe Mr. Hoy (and you) traded more truth than lies in the old days... he might have served in the Japanese Army during WW2, which, of course, would make him a legitimate Veteran of a Foreign War (VFW). What think you?

Great post, and a worthy totem for the story.

Great example of why this is one of the best blogs online.

I've never made it to the Algonquin, though I did finally get to Bemelman's at the Carlyle back in August, which seems to have a similar vibe. I don't recall you ever mentioning Bemelman's before -- any stories?

Thanks for sharing this story.

This could make a good short story. Or maybe short subject film. You're all heart.

Nicely done Tintin. A fine remembrance that left me stirred, but not shaken. Just the way I like my martini.

A good Barman is a valuable find....and when one passes it is indeed a sad event.Query...will you still visit this joint now that Mr. Hoy is no longer behind the bar?

And just how many drinks were mixed the rest of the night and strained through a dish towel due to the absence of the traveling strainer..?

I'd heard he'd died. The Blue is my favorite mid town watering hole and has been for years. Don't get there as much as I used to but it's a great place.

Your first post on Mr. Hoy and the bar was vivid. This ending is all the more moving in light of the background you've provided.

Excellent story. It made me happy and sad and there was even a larcency!

I hope no one from the Algonquin reads your blog or you're in big trouble.

Trad-great post, great story, great remembrance! Thanks for the story and the entertaining way in which you framed it. It is very fitting that you ended up with the strainer no one could appreciate the sentimentality of this delicate instrument. Keep posting...

I love stumbling through your archives.