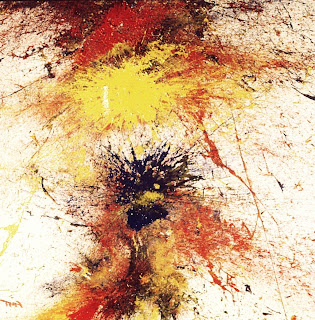 The very best Trad Art is - - Well, I once heard it perfectly described as, "It don't cost nothin'. " Yes, indeed. That would mean a friend or family member did it. By did it - - I don't mean they bought it. I mean they made it. We start with my Trad Dad and his oil painting with firecrackers. Brilliant.

I watched him as he did the painting above and numerous others. He'd take a long string of firecrackers and squeeze tubes of different color paint down the length. Tack the firecrackers under the seat of an old bar stool. Prop the canvas in front of it. Throw an old piece of carpet over the whole production. Reach under the carpet with his Ronson cigarette lighter that was engraved with, "Fuck Communism" (long story) and light the fuse. And there it is. Not bad at all.

When I lived in Chicago, I could've thrown a shoe out of my apartment window and hit 22 bars and restaurants that would've have paid a fortune for this. Or, I could have had an open tab for a month. Same thing. I'm not sure if I have it right side up. I'd ask my Dad but I don't think he knows either.

TinTin,
Bless your heart. You just connected the (seemingly polar) dots between the military and modern art! The synapses between your left and right cortex's must be working over time!
Well done shoogah'.

"I don't think he knows either."