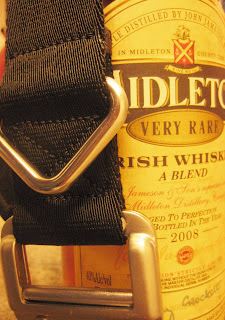 Nylon Para Belt & Midleton Irish Whiskey
I don't consider nylon Trad. But bear with me.
I learned how to dress from other men. My cousin, the Hilton Head golf pro was a dapper southerner who was good looking, read Esquire, always drove cool cars and had a lot of girlfriends. He was my God and influenced me greatly in dress. That and I scored a lot of his hand me downs. I am also influenced by the men I see on the street. Not the street in Ft. Wayne Indiana but streets in London, New York, Palm Beach and Washington DC. There's more style and taste in these cities than you'll ever see in men's style magazines. But I never thought I'd be influenced by a Command Sergeant Major from the north west hills of Georgia.
We met a couple of years ago at the urging of his wife. His military career was amazing and if I divulged even a tiny bit--he'd kill me. He wrote a book and had some very good fortune. Movies and television and hanging out with famous actors and directors. But he's managed to stay who he always was. A bright and honorable man who can tell a damn good story. I noticed when we met that he was wearing this belt. I had not seen a belt like it since I got out of the Army. Made from nylon with light weight aluminum hardware, they were a common sight on weekends at Ft Bragg's sport parachute clubs (now gone) like the Green Beret Club, the 82nd Club and the XVIII Airborne Corps club. It's a belt that tells a story. Cops like 'em. Vets like 'em. I like 'em. But what I really like is Midleton Irish Whiskey.
You'll notice on the fist sip that this is something out of the ordinary. Like the Green Beret Sport Parachute Club...the smoothness hits first. The full mouth of what seems like honey comes second. It shares with a good Cuban cigar that rare ability to be powerful and smooth at the same time. Then the finish kicks in and hangs out for what seems like forever. If you like single malts -- you'll be amazed by this stuff. You may also be amazed by the price. At $140 or so it is something special and not to be shared with your 19 year old college nephew. This stuff is for you and perhaps a Sergeant Major you know.
Posted by tintin at 08:49

Kind of like belts that sailors make -sometimes from sail or rope (though that's going too far) or using a small tackle?

Side note, much as I liked the idea - and it looks very very sexy but elegant on a girl - fred astaire was able to pull it off.

oops I never said what Fred Astaire was able to pull off: wearing a tie as a belt.

i, unfortunately, do not personally know any sergeant majors...at least not yet (pending my enlistment in the army reserves). however, given your description of midleton irish whiskey, i'm not sure i would want to share...!!!

Any idea where such a belt might be found? what is the common name for them.
One thing I have found interesting though - I would almost be a bit guilty to wear one for this reason:

A generation ago you could tell a lot about a man by his ties (they would have been picked up by his association in various clubs along the way) his belt (regiment, school) and other accessories... now they have all been commodized to the highest bidder and utterly detached from meaning.

So am I being 'fake' if I walk around with a parachute belt?

Anon- I always thought the Astaire - Tie around the waist thing - was cool...on him. I'd look like an idiot or worse. That's not to say you would. I think different folks can pull off what others can't. That and they have sartorial courage.

skorp- Enlisting in the reserves? You will get to meet a Sgt Major. Just don't call him 'top.'

Anon- They call them D ring and V ring belts. Prowl around sky diving and army surplus stores on line. They're cheap. And because they speak to a general audience (cops, skydivers, vets, active duty) and not to a specific unit, rank or skill (HALO, Delta, Ranger, SF) I think anyone can wear them. When I was in the army, they were making just about everything out of od nylon straps...watch bands with covers, wallets, demo knife cases...and the material wears like iron.

I could not pull of the tie as belt thing. Astaire is the only straight male I have ever seen make it work - and only when he was older. Well, he was always older.

You might try a Fighting 69th made with Midleton (3 parts champagne to 1 part whiskey.) Surely after a couple (or more) of those this weekend you will have some interesting posts next week.

Anon 15:22- One of the great things about knowing yourself is what John Wayne, Clark Gable, Fred Astaire, the Prince of Wales, Gary Cooper or Winston Churchill wore --does not mean you can wear without looking silly.

Anon 16:27 - Sounds nice. With Jamesons or Bushmills but I'm not mixing $140 whiskey with anything. Still, the folks who put A-1 on a dry aged steak may wanna give it a go.

So true about the cities you mentioned. I think finding a person to look up to is getting pretty damned hard to do nowadays.

I've met a few folks in my time that were worth emulating. They were always the humblest people in the room. And I've met some famous names, that fall flat. I mean sloppy in dress and manners; they can't eat without leaving food on their face. Talk about delusion!

Think I'll try a few of those 69's with champagne and whiskey...

I hate whisky so good. It helps to belt it back. But single malt does make a difference to this very unsophisticated palate.

I used to walk around the house holding a short glass of iced tea "on the rocks" because I thought it made me look like a member of the Rat Pack, or like a high society bon vivant. I would slur my speech, briskly joking to no one about women and cars and roulette tables. I was maybe 14.

I know you can relate.

You have a golf pro cousin in Hilton Head?

tintin, yes, but sometimes the only way to learn that you can't wore what they wore is to, well, wear it...:)

Now I don't know too much about clothes Tintin-but I'm thinking that belt looks like a tie-down strap for a bass boat trailer. What do you wear with that thing?

I think ADG is humble and has a good feel for apparel, firstly.

Secondly, I just read the piece in Saveur May' 09 on Irish's - they really liked the Midleton OLD and Rare and Really Dusty or whatever it's called. And it was a fascinating read. Not that this is my subject but my Dad was a Jameson drinker...

Be well, The Hostess

cg- Lord Chesterfied's letters to his son should be required reading for every swinging Richard. Like two years of public or military service - -

DB- I was drinking water outta beer bottles at six. My father thought it hysterical. Not the PC thing to do today. When I was 13 I could do a decent W F Buckley with a clip board but I've since learned that Gore Vidal was smarter and funnier and I love Burr.

Afghan Man- Thanks so much.

Anon- I agree. When you're under 45. Once over 45 you usually know what looks stupid without trying it on. Since we're running outta time -- it saves us time.

ADG- Yeah, right. How much have you dropped at Flusser? By the way, that belt looks to be as wide as that bra you have in your closet.

Blushing Hostess- Crap. Saveuer beat me to the punch again. Honestly, I haven't seen it. The good folks at my favorite restaurant have turned me onto Food Arts magazine and I can only afford one foodie mag.

DB- I forgot- The golf pro cousin was 13 or so years older, drove a white Porsche 912 and later went to a 302Boss Mustang and a Cougar convertible. He was on the tour in '69 or '70. Played in the Masters. Heady stuff but what'll always stay with me are the girlfriends, the cars and the clothes.

Hey tintin,
that reminds me, maybe this would be a cool post - 'trad' stuff that wore when younger but you realize you're just too old to wear anymore.

for example, I think the boyfriend's prep school tie as belt looks so sexy yet elegant on YOUNG women, over 25, it just looks silly.

Even with 'trad' stuff there are some things that there are age limits on .

Anon- Yes, that's a heck of an idea. In large part because I do it all the time.

Anon- After serious consideration - - I've come to the conclusion there should be a 'age requirement' as well. Apparel that youth should not attempt.