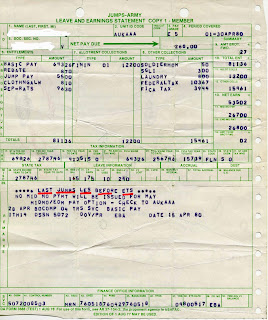 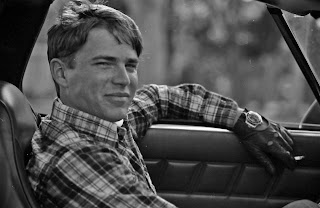 18 May 1980 was my ETS (Estimated Termination of Service) date although the actual date was 17 May. It was one of the happiest days of my life. I was to start college in September and had an entire summer with a Fiat X1/9 in Florida. Things were looking up.

The Fiat had a seat belt monitor that could also tell when I had cash in my wallet...which is when it broke. I had to hustle for college loans, basic education grants, the GI Bill and two part time jobs to pay for my first year of college while working the summer as a midnight to 8:00AM security guard at Marine Land.

The Pendleton flannel shirt was from the Ft Bragg PX and I don't even wanna know where those gloves came from. The Fiat (Fix It Again Tony) was a complete piece of crap that many years later friends in London would laughingly tell me, "You owned a Hairdresser's car, mate."

The Leave and Earning's Statement lists Jump Pay at $55.00 a month. Unchanged since WWII when fifty five bucks could go a long way. Still, the "Laundry" or Quarter Master Laundry was a steal. All laundry was done for $8 a month although jeans were always starched which pissed me off to no end but seemed to make the guys from Texas happy.

Soon there will the same number of years (31) between the end of WWII and when I enlisted in the Army. These calculations kill me.

Is that you in the car? Really cute! This native Texas girl ironed her own jeans, and the only guy I dated alone (when my parents were out of state) was the guy I married, and he was from New York, so he didn't starch his jeans. And, he had to marry me. I was expensive.

Great post and a great photo that fully communicates your frame of mind at that time!

Calculations are a drag. How about the one where you [I] realize you have been in your work for over half your life??? UGGGGGGGG.

I was zipping through hairpins yesterday and I thought that some driving gloves might come in handy. But I quickly disabused myself of the idea.

It's great that you can chuckle at yourself like this, but you're only being morose by doing calculations like that.

If you must, do the one where you figure where you were in life when the Playmate of the Month was born. You'll be depressed to figure that you were out of high school, the army, college, whatever. Just let your eye linger briefly, then close the magazine and walk away slowly.

My name IS Tony, and I fixed your car all the time. I remember how on one of your many visits to my garage your idiot friend thought that the "Bertone" badge on your car was the stereo manufacturer. He pronounced it BER-tone. You had to tell him that it's the name of the car's designer, and is pronounced Ber-TONE-eh. He was such a hick he forgot that his own name also ended in a vowel that gets pronounced!

A few Florida coastal summers will just about kill any car, but glad to see you looked a little further north in Europe for a set of decent wheels. Even if I can't work on it, I'm sure it doesn't fall apart all the time.

BTW: Great photo of you, handsome, cheeky devil! Yep, you look like you have the whole world on your "to do list."

Hey lzr! What you have nothing better to do than post all day about how things were better when you were young/ hat's becuz you wasted your life now U just sit around drinking and fantasying men in prep clothes.

18 May 1980 was the day I graduated from high school. Salutatorian in my class (of 12) in the smallest, most boring town on earth.

And Mt. St. Helen's erupted that day, too.

Summer is a Verb said...

That's a fantastic pic! And, what ever happened to the popularity of Penedleton?

OMG, LES's, reporting for pay (only during basic on tank hill at Fort Jackson), no direct deposit! Boy does that piece of paper bring back memories. When my husband retired in 2000 (senior jump master, star and wreath, 160 jumps, the whole nine yards) jump pay was up to a whole 150 dollars a month. BTW, we met at your old stomping grounds, Fort Bragg. Coed unit, 319th MI BN, part of the 525 MI Brigade. D

I left the Air Force 4 years before you. First I had to undertake the re up lecture. Steady job and free work clothes didn't do it for me.

Tin-tin's phred/dad said
I remember that Fiat. A real P.O.S.
When I was younger, I really wanted a BMW. Much older now, I'd settle for a BM and leave out the "W" part.

Lynn- What is about Texans and pressed jeans? Never understood that.

M Lane- That turned out to be a pretty good summer - - despite the Fiat's electronics. Hopefully I'll last longer than Italian steel on the Florida coast.

Ben- The last time I read a PBoy was about 12 years ago when I had a couple of meetings in their Chicago office. Haven't looked at it since.

Tater- I took my Army issue, "birth control" glasses off for this photo.

Tony! I must'a put at least one of your kids through college. That mid engine was a mother to tune.

martylane- 'Short'...still one of my favorite words - - the sound of it is so comforting.

MOR - I think there's some serious competition for that town you're from.

Anon- MI were great folks to work with. Wacky but great. I did some time in XVIII Abn Corps G-2 and it was like a long party. Much better than those ticket punchers in G-3. I loved the mess hall at 4th Psyops.

Michael Rowe- I was trying to be Italian.

ADG- I had a '67 MGB but that was stolen while I was on a FTX. Then a '68 Dodge Charger donated by Trad/Dad that was wrecked by a buddy in my company (never loan a car to a stoner). You can't get more embarrasing than a X1/9...except maybe the Fiat 850

Toad- They offered me the 509th Abn Regt in Vincenza, Italy for a 6 year re-up. Only 2 years in Italy then back to Bragg. If they had given me 6 years in Italy I may have taken it...and I'd be retired now with an Italian wife and a Alfa Romeo.

What a superb photograph! Love it!

The Rolex Submariner artfully peeking from your driving glove is a nice touch. It is a Rolex, no?

Olive- I have so many negatives I never printed. It's gonna be years going thru 'em.

Anon- Yes. A sub I bought in '77 and still own. More here if you're interested:
http://thetrad.blogspot.com/2008/10/trad-investment.html

Tintin...there ARE more embarrasing cars than an X1/9...remember, I had a Pinto hand me down from my sister after I had the MG Midget and the Triumph GT-6...and Toad admitted that he had a Vega..."Cosworth" as if that softened the Vega blow at all.

Tintin,
You may have thought Mi people were great people but my husband had FABULOUS time adjusting us weirdos (said affectionately). He did an early career MOS change from the infantry to MI and when he signed into the unit there were guys who showed up in formation wearing makeup. Way before metro look was in. Before don't ask don't tell. He didn't stick around very long on the conventional side. He went to the dark side for the remainder of his career. No one wears makeup there. D

I'm not too sure. When I was younger, I saw them, but my parents just threw ours in the laundry, and if I was going out, I pressed, not for around town or school. I married in my teens, and didn't date anyone who sent theirs to the dry cleaners. Maybe it meant they were fast.

Too many great comments here to add anything interesting....

Had a FIAT 2000 Spyder (probably worked on by your pal Tony) looked great with a surfboard on the passenger's side. California climes always a bit better on the Italian roadsters than Florida. Scares the pants off me that FIAT is saving the automotive industry in the US and Europe!

Anon- I was an 11B2P and was heading to college to learn Russian and get a degree in International Relations. And then things happened. Grew a beard, did some plays, did some long board surfing and had a few toga parties. Wound up an English major who barely graduated.

Lynn- Everyone I knew in the Army from Texas starched their jeans, loved Dairy Queens, drove Firebirds and slouched down a good foot and a half when they drove. Good people who always stuck me as either the greatest guys in the world or the biggest jerks. Never in between.

CG- Where you been? I always dig your comments and this is no exception. Don't know if I've made it...That's a stretch but the journey is a good one and always with a little remorse. Kind'a like my drinks-- with a little bitterness.