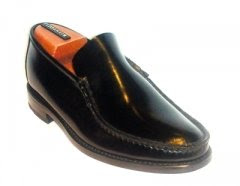 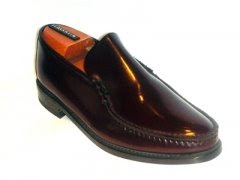 I see a lot of things in my mind's eye when I look at these shoes. Crew cuts and black plastic frame glasses. Martin Milner in Route 66. Pegged khakis with white socks and a short sleeve Madras pop-over. Beer cans with two triangular holes on the top. Bermuda shorts with a starched white button down shirt worn untucked. Rangefinders. A 101 Land Camera. Narrow ties.

In 1965, Florsheim introduced the Yuma. A plain vamp moccasin hand sewn in the Chicago factory. I'm pretty sure Trad Dad owned a pair. As mentioned before, he was fond of short sleeve bleeding madras and chinos in the summer. Grey trousers, v-neck sweaters and white or blue button downs in the winter. Not bad for an Army officer where his counterpart dressed in hi -water Sansabelts from the PX. I remember a black pair of Yumas with his deeply cuffed grey trousers.

While I prefer the Yuma in black, it was re-released in 1997 or '98 as a "Royal Imperial" model in authentic cordovan for around $400. Talk about Trad. The manager of the NYC Florsheim at 49th and Madison told me they used a cordovan from a French tannery until it went out of business adding they were one of his biggest sellers. He never understood why the non-cordovan shoes were discontinued. I told him these decisions were usually made by some asshole with an accounting degree. He nodded.

Hey, it's Chris from Off The Cuff; I meant to ask you this earlier but never got around to it.

Why are you selling that A&S suit? Making room for newer pieces?

Chris,
Yep, time to clean house. Just sold some Hermes ties on Ebay with the boxes. They did very well.

Whatever I haven't worn in the last couple of years is going. I do have another A&S but the wool is spectcular as is the color. That and a Poole morning coat that I'll probably never wear stay with me until I die or loose my closet space.

This style always seemed more traditional (and grown-up) to me than the Weejun-style penny loafer.

oldschool-You hit the nail on the head. At a certain age the Weejun looks like you're trying too hard. Eccentric at best (nothing wrong with eccentric).

Anon- I hadda flat top until I was 8. The Beatles made an impression.

Florscheim will release this shoe perhaps as early as August 08. It may be called the Langsford and will only be available in retail stores for $140. It will be made in either Spain or Brazil.

I did find a on line retailer who offers the Yuma in the cordovan color for $168. Florsheim knew nothing about this. I'll hold off on info until I see the shoe. I ordered it yesterday. I am hopeful I've found old new stock and they're made in the USA. But I doubt it. Should have it in 5-7 days.

Looking foward to more info on the Yuma that you found.

tintin, I'm sitting here holding a copy of "Last" with the photo of the Floresheim Yuma. It says that they are being made for Beams here in Tokyo. The quoted price is about $300.00; that they are to be in calf; and that they are McKay sewn, not Goodyear welted.

For years I saw them in Japan after they had all but vanished in the States. I hope that yours fit well. Going for the crew-cut again?

Great info, HTJ. The folks at Brooks Bros. told me about Beams. The owner is a bag fan of Brooks and spends hours grilling the salespeople.

The Yuma did dot arrive. Instead, a ultra lite cap toe lace up made of some kind of leather imitation. I thought this might happen. There seems to be a good deal of confusion about the Yuma and the Florsheim folks aren't any help. So, the crew cut may have to wait.

Tin Tin - Let us know if you ever find these available in the US; nice shoes. Great blog, thanks.

Your blogs are fantastic!! What a blog was meant to be, an expression of personal passion that has broad interest and appeal... among the True Believers.

I wore the Yuma's with relish at Brownell Jr. High in Grosse Pointe Farms, MI in the mid '60's.

The Trad style was monikered "Ivy League" in those days and in that locale.

We were members of the Detroit Yacht Club and Crescent Sail YC.

When I moved to Southern Cal (South Pasadena) in that decade all the surfers were wearing wingtips with their khakis and jeans, along with Towncraft pocketed tees. Like hand-me-downs from Dad. Loafers were not to be seen.

Just one of the ways in which everything went hell when upon our leaving GP.

I have just confirmed that Florsheim will be rolling them out as the Langford, style #12025 in October or so.

The Langsfords are out. You can find them in the Florsheim catalog but not on the site. As posted earlier they are model 12025. They don't have quite the solid panache as the horse-hide ones shown above but I am sure they are much cheaper.

Darn. Forgot the URL to the .pdg Florsheim catalog. Sorry!!

According to Florsheim customer service, they will be available in black and burgandy "heritage calf leather" (w. sheepskin lining?)November 7, 2008.

These appear to be back in circulation, re-intro'd yet again as the Yuma II. I just bought a pair of "heritage wine" (calf painted burgundy) for an embarrassingly low price on eBay.

There is a pair on eBay still in black, 8D

There are reports on other blogs of them showing up in discount stores in the UK as well at Lazarri's.

Finally, these are true to the original with an open cut vamp line rather than the hem seam on the vamp of the Langford.

They are not up on the Florsheim site yet, but look around.

I am going to keep mine indoors until spring.

Here is the link to the UK Yuma discussion.

I've worn this style since I first picked up a pair at a Florsheim shop in the 80's. In '98 when they became "Royal Imperial" I picked up a pair each in black, and cordovan. Only available at certain stores (I mail-ordered them from a Palm Beach store). Glad I got them, great construction, and when broken in, wear like slippers.

Alas, it would be good to have another pair, even if not quite as nice as they were.

I wear a lot of early-mid-60's vintage (think: Sy Devore) suits, and these are the ONLY shoes that look right with them to me. Also look great with tuxedo, AND comfortable for dancing.

Does anyone know where these might be available in the US? or anywhere else for that matter. Searching seems to turn up dead ("no longer in stock") links, and the like. You can either reply here, or send an email to me on MJeffersonDC@yahoo.com

Glad I found this little page, a lot of good info, not to mention others who think sartorially the way I do.

It's now called the Langsford and was re-introduced by Florsheim. THey also pop under the Langford a lot on eBay but most of the stores should still carry them.

I wish they or someone would make a full-grain leather version again.

@Mark, they do easily available in South Africa. Brown and black 3E with only.