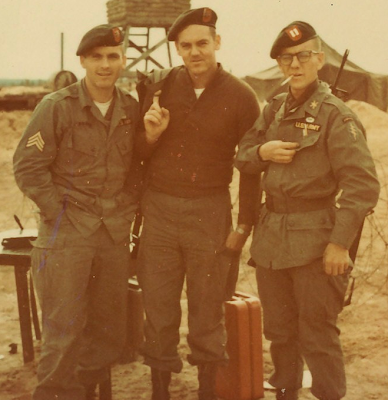 From Left: A couple A team sergeants and Dad on far right 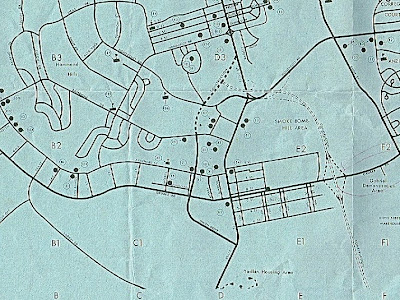 I remember him walking home. At eight, I was in my Hammond Hills bedroom researching an MG-TC. The Old Man was racing in the local SCCA club and I desperately wanted him to dump the Berkley with the chain driven motorcycle engine for a British Racing Green TC. For some reason, I look out my window and I see the swagger. More shoulder than hip - he had cocky written across his forehead.

The captain bars on his green beret glint from the sinking September sun. Starched jungle fatigues are cut at the waist with a web pistol belt. My Old Man is walking home from Smoke Bomb Hill with his XO who has less than seven months to live before drowning in the Son Toy River. Later that night, I'll fill an empty Budweiser bottle with water and wander out to the patio and stumble and weave in front of these two men who'll laugh their asses off.

10 years later I drank draft beers at the main post bowling alley with three of Dad's team sergeants from his tour in Vietnam. Two were still in Special Forces. The third had retired and spent most days sitting outside his trailer in Spring Lake, playing gospel music over a surplus PA system. The two sergeants told me how Dad used a Boy Scout wire saw to garrote VC. They laughed while the gospel lover just stared at me.

I was in the middle of zero month for the SF Qualification Course. Phase I at Camp McCall wouldn't start for another two weeks but I was happy fucking off on Smoke Bomb Hill. SF was a fairly loose group and I watched senior NCOs dry hump each other out in front of morning formations. There was so much dry humping in the Army that when I went back to college, still shitting army chow, I dry humped Roland Schumann who was bending over an ice box looking for a pint of chocolate milk. He turned and looked at me with this unmitigated terror in his eyes... and I realized he didn't get it. Neither did the 300 or so other students watching from the dining room.

Back in the Army, I knew I wasn't going to make it through Special Forces training. One of the few times I've accurately predicted anything. Of my class of 88, only three would get a green beret and they were all second term NCOs. The washout was so great, I was told my class was the last to allow anyone under E-5. But knowing I didn't have a prayer took a whole lot of pressure off and I Ghosted, disappearing to avoid details, whenever I could.

Another formation, more dry humping and names of the 85 "No-Go" are read. The 1st Sergeant repeats, "82nd Repo" over and over and over…until XVIII Airborne Corps goes to an PFC infantryman. Everyone looks at this bastard and wonders whose dick he's sucking. I'm wondering what the fuck an infantryman does at a corps headquarters and as I ponder the thought, my name gets closer and closer and the first sergeant, who's fond of saying to the formation, "You, in the green pants and black boots, come here," says my name and XVIII Airborne Corps. And everyone looks at me and wonders…

To this day, I still do. Before my father died a couple years ago I asked him for the umpteenth time, "Was it you? It had to have been you." He sucks on a cupped cigarette, inhales and blows out a pin stream of smoke and tightly wrapped words, "That wouldn't have been kosher."
Posted by tintin at 12:49

Back in the saddle....these are the stories we love to read!

Main Line- And way off the reservation. Thanks.