"Gone is the romance that was so divine…" 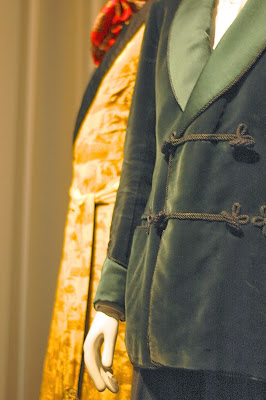 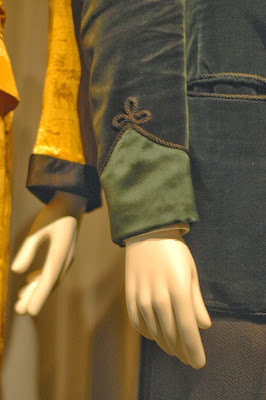 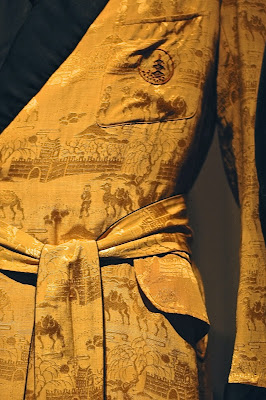 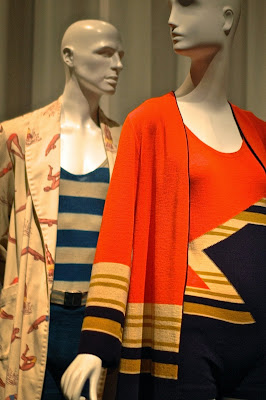 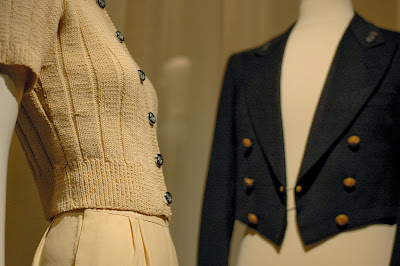 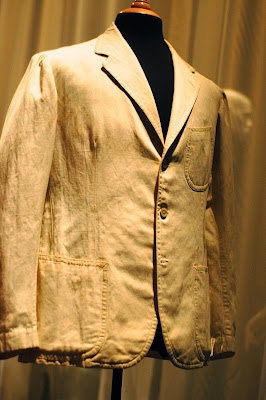 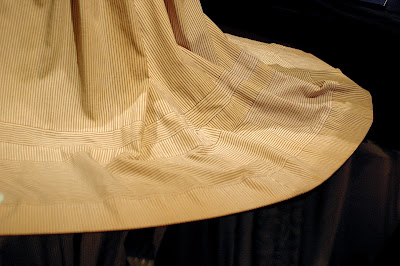 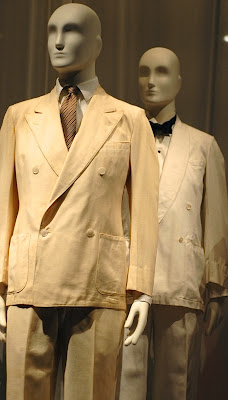 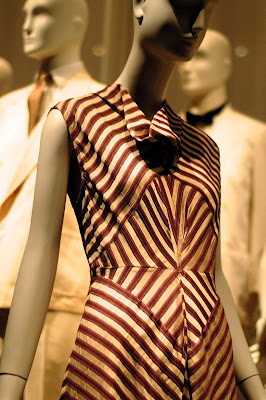 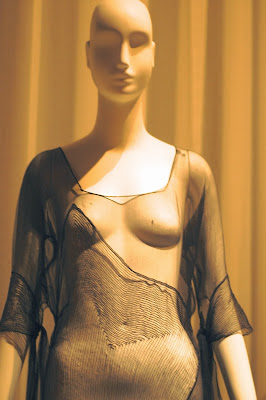 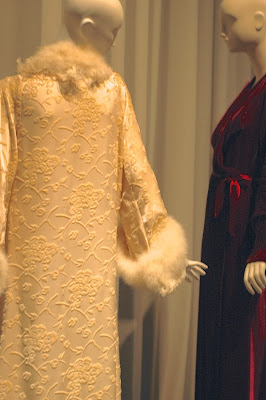 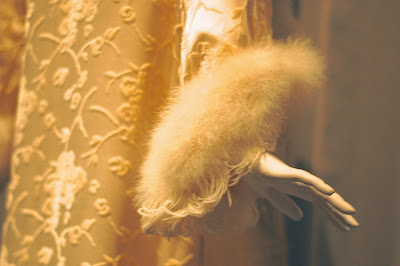 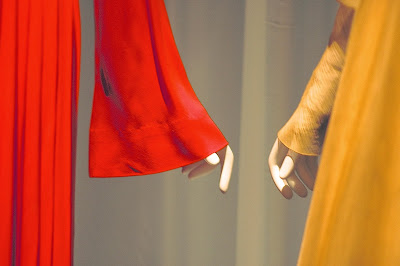 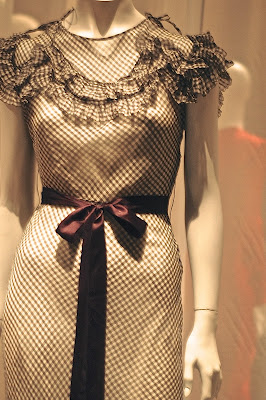 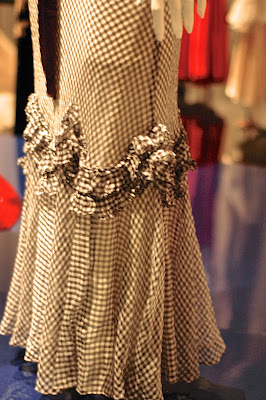 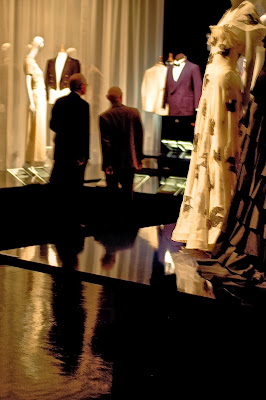 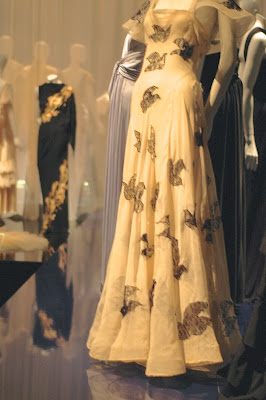 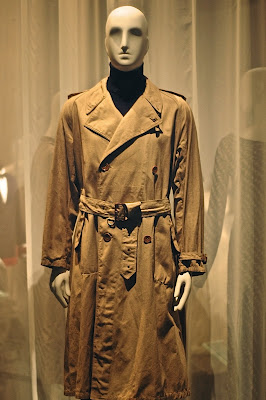 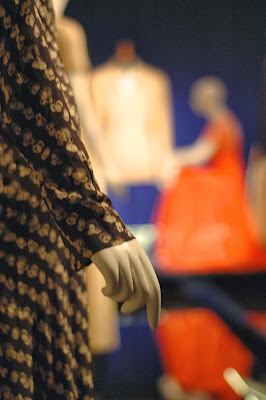 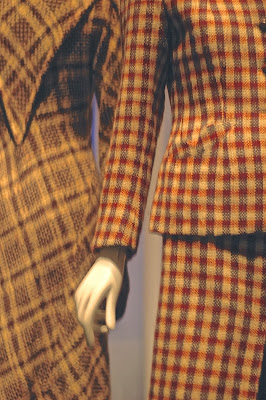 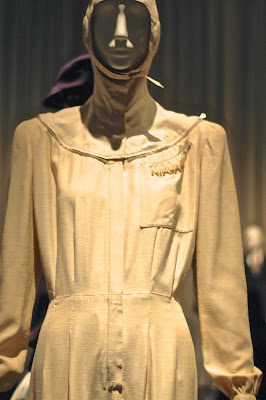 The second you see it - It hits you.  I was last here for the Ivy exhibit but the space has grown up.  Men and women are in residence having nudged the college kids into storage.  The elegance of this space is simple.  I run into a young man whom I respect immensely and he tells me he thinks it, 'uncompleted.' I tell him it only gives way, as it should,  to the glorious respect of the cloth.   Beautifully cut... for men and women both.  It is damned near... other worldly and I don't think I'll ever forget it.

The Fashion Institute of Technology is not the kind of place you'd suspect has a museum --  Especially in New York City.  It stands at 27th and 7th Avenue looking more like a concrete federal office building than a fashion institute.  The museum entrance is on the south side of 27th, usually blocked off, adding to the federal feel of the place.  Inside, a flight of stairs down, is an exhibit area darker than the inside of a goat.  A quiet calm settled in as the 1930s stood, and sat, in front of me -- Men and women and the clothing they wore and, I like to think, took off each other.

Co-curated by the museum's, Patricia Mears and writer, G. Bruce Boyer, the clothing hails from the 1930s. It was a time of economic and political, 'shit hitting the fan'  but as Boyer has often written, it was, despite the uncertainty,  the golden decade for apparel.  I've always said that today's popularity of menswear has much to do with our own economic hard times.  When you're broke and out of a job,  there's something to be said for getting dressed up.

Bespoke is everywhere in the exhibit.  In that respect, it belongs in a museum's humidity controlled steel locker, wrapped in acid free paper and tucked far from the public's oily fingers.  Sorry, I once worked as a museum technician but as clothes mad as I am, I couldn't help but admire how interesting the women's clothing was... it's so alive.  Silk clings to a breast and falls off a nipple.  Shape forms around a tight waist and bottom while a hip is cocked and a long finger seems to point to my crotch.  Wasn't there a very bad '80s   movie about a mannequin coming to life?

Menswear saw both the Italian and British represented generously by loans from Rubinacci Napoli London House and Savile Row's Davies and Son.  Luca Rubinacci and I stand together admiring a trench coat from his grandfather's company which began in the early '30s.  I point to the gorge of the collar and Luca tells me a story about his father's obsession with collecting vintage London House for a family museum.

Handed down over three generations, his father acquires a Rubinacci white tie jacket made in the '30s and most recently owned by a circus clown who patched it with bandana cloth. Luca tells his father to restore it but his father refuses telling his son, "I don't want what it was --  I want what it became." So do I.

A,
Can't wait to hear what you think about it.

Tintin, nice post. The 30's were indeed special. When you mentioned the mannequin coming alive, that reminded me of the movie "Lars And The Real Girl."

A new book by Virginia Postrel, "THE POWER OF GLAMOUR: Longing and the Art of Visual Persuasion" offers some wonderful (and provocative) insights on how & why glamour helped define The Thirties despite the recession.

Anon in NY- I liked Substance of Style. I'll have to order it being a sucker for military recruiting ads and packaging.

It was great seeing you at the show, Tintin! Young and respectful? I gotta work on changing that.

In regards to the 'completed-ness' of this show, I was coming in with memories of the Ivy Style exhibit on my mind. That show was so lush with backdrops and assorted ephemera of the age, that this show - which is amazing! - felt more, hmmm, hushed and reverential? I will be heading back there soon with my sketchbook to make some drawings and examine the clothes in a more intimate setting.

You really hit the nail on the head with commenting on how alive the clothing was. It really did have a shock of sexuality and color that we tend to overlook when thinking of the 30's fashions. I just wish more women today would dress with such elegant sensuality.

Chet Baker - The Thrill is Gone

The DNA of Madeleine Vionnet is all over it.

Hey, You're one of the most decent young men I've ever met. Geez, you even know what a thank you note is. Old guys like me can learn a lot from you.

I tried to wear that smoking jkt outta there. No dice. That picture was shot in Wanamaker's on cream cheese.

I like my title better but I hear ya.

Beautiful tailoring. Back before obesity hit the collective "we".