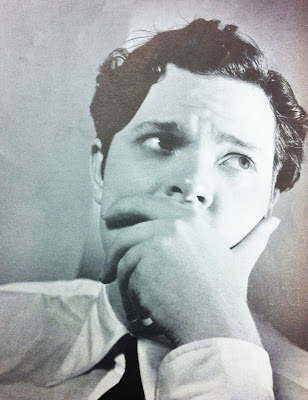 Peter Bogdanovich published a bio of Orson Welles in the early '90s. I was married and living in Lake Bluff when the Echo Xray gave me the book for Christmas in 1992 or '93. The bio came with four hours of recorded interviews at numerous locations to include the set of Catch 22 and a NYC taxi where Welles offers the driver a gold doubloon if he'll step on it.

Last year I unsuccessfully looked for the interviews on line since my own tapes have resided in a storage locker somewhere in Northeast Florida for the last seven years. But the internet finally caught up and here  they finally are with the first half hour above.

I remember hearing these the first time and being overwhelmed...Not just by the technical insight and gossip...but just hearing Orson fire up another Partagas, hearing ice being swirled in a drink and feeling like I was in the room with him.

Welles, who was from Kenosha, was all over the the north shore of Chicago. Acting as a 13 year old at Ravinia and attending the Todd School for Boys in Woodstock, IL --  I'd drive around listening to these tapes and couldn't stop thinking what a great film they'd inspire. For me, they were so visual -- Maybe they'll be for you as well.
Posted by tintin at 15:46

Tintin, thanks for sharing. Huge presence...and there is no pun intended!

The link takes me to only a jpeg...is the full audio somewhere else?

John- My apologies…link is fixed and am glad you checked it out. BTW, nice piece on Sarah Palin's US History class on your blog, "Breakfast Served All Day."

I don't know if you knew he had a grandson who he never knew or who knew him. Wells and Rita Hayworth's daughter Rebecca had a son who was put up for adoption at birth. The boy didn't find out his identity until his mother (Rebecca) died. It's a long involved story and very sad. More info can be found by going to google.