"This Must Be Your Lucky Day" 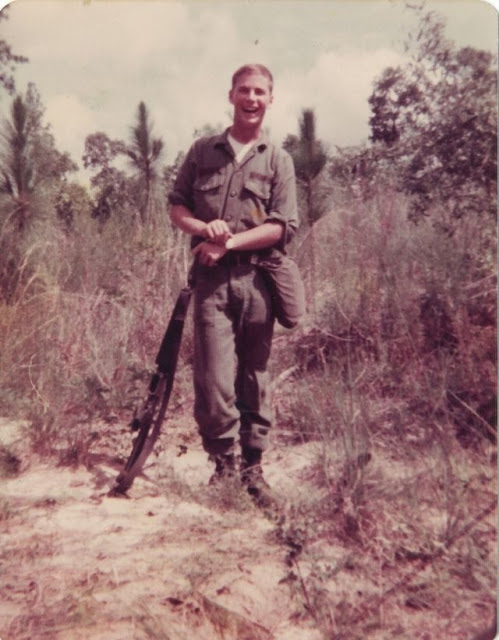 It was a hot Summer in Georgia. Thanks to an excessive heat, humidity and wind index the Army called, "Wet Bulb," our time in the field was mostly spent sitting around drinking water from canvas lister bags . The water had a tangy canvas aftertaste and was cool due to condensation and ice the drills sometimes added.

Infantry school was a vast improvement over basic.  We were still denied weekends off but the drills were focused on building us up rather than tearing us down which was the case in Basic. With rare exceptions, the drills were on our side. Always helping with tips, stories, and the occasional reminder to let you know they were still in charge. 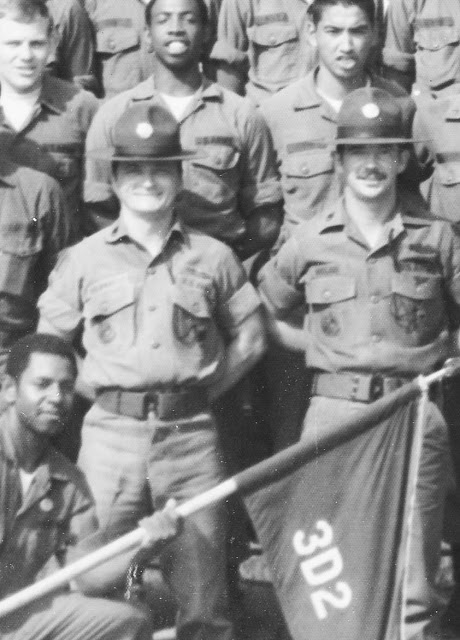 Most drills went home at night but Nolan stayed in a private room on the second floor of our barracks. Occasionally, he would march my platoon to a trailer PX and instruct us to buy a 6 pack of beer. We'd march back and fall out into the woods where there was an abandoned concrete bunker we did our drinking in. We'd listen to Nolan tell stories of his year with the 101st Airborne in Vietnam, Pathfinder School and how much he loved the Army.

On a Sunday march to the PX we were halted by a drill from another company.  He spoke to Nolan who laughed and  turned to me,  "Tinseth, fall out and report to Drill Sgt Ott."   Nolan marches away with the platoon as I stand at attention in front of Ott who asks, "Do you have a girlfriend, Tinseth?". I look at Ott and behind him I see a tan VW with my girlfriend in white shorts and a navy tank top. Her brown tan evidence of her Summer on a beach. She seems unreal standing next to her car parked in the POV lot. I watch my platoon and Nolan march by as they all stare at her gravity defying rear end and tube top.

Ott asks if I had anything to do with her driving up. It was understood no visitors were allowed until graduation.  I tell Ott 'no way.' Amazingly, he buys it and adds, "This must be your lucky day."  We're shown to a day room for visitors that I didn't know existed. I'm told we have an hour after which she will have to leave. Alone, we lock ourselves in a  latrine and make the most of our time. Over, with much of our hour to spare, I tuck my fatigue shirt into my fatigue pants, square my web belt with my gig line and ask my girlfriend  if she'll marry me.

We didn't get married but I don't remember being as happy as I was that Sunday afternoon.  Sometimes, when I'm feeling sorry for myself,  I think how unlucky I've been...but that picture of me, a few days after her visit, reminds me just how lucky I've been.
Posted by tintin at 18:17

A great memory. And a way of thinking we should all remember, with or without the special visit.

Welcome back. Yes sir! Military man myself, I must classify your photo as having a "Shit eating grin!" Your drills were good guys and you were indeed lucky! In the Corp, a DI would have verified her as you girlfriend and then ordered you to order her to have an our with him!!

A man's article? I was starting to think that you were turning into an old queen. About gave up on this blog.

ML- I know what you mean - - but this is supposed to be about the special visit.

Anon- To the Dexter Lake Club

Smitty- Didn't know you were a knuckle dragger. I ate a lot of shit sandwiches in the army.

B- That's cold, B. I even stood up for you the other day. Someone said you ate shit sandwiches and I said that wasn't true ... You didn't like bread.

I also found this on www.military.com

Mike Nolan (Rosie) Please anyone with info on Mike. Lt John Smith and Joe (Brooklyn) want to meet with him.
Please contact us asap

Jeff - I tried to respond to Lospenuso but the link expired. Will you try and send him my email?