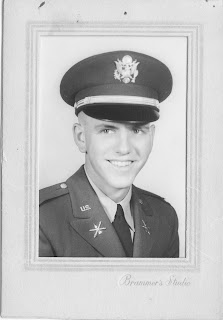 I have a love of uniforms. I guess they represent a stability and security I grew up with. The photo above is my father about the time the photo below was taken of me preparing a bivouac. 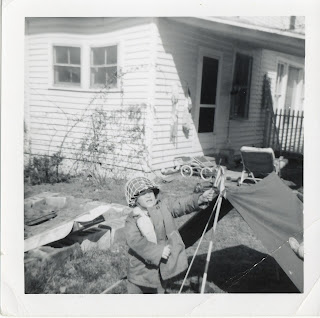 I grew up immersed in starched khaki and olive drab. Dress blues and green berets. Jump boots and Jungle boots. I couldn't wait for my first uniform. 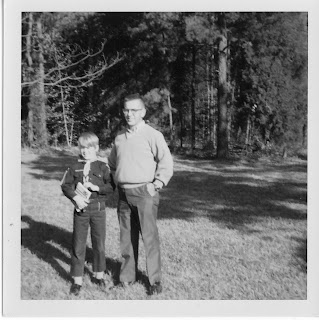 And here it is. Cub Scouts not only provided a uniform but also a closed world of shopping at Belks in the Boy Scout department. Only open to members you see. Jack knives, balsa wood scarf holders that I never could finish and a library of books and badges. My introduction to the love of bobbles.

Next came Junior ROTC. Certainly the Naval uniform stood head and shoulders above those Army and Air Force affairs laden with ugly patches, ranks, ribbons and medals for brushing your teeth five days in a row. 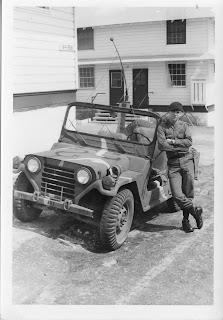 The Army was not junior ROTC but I'd be lying if I told it wasn't close. A common chorus among the troops, "What's the difference between the Boy Scouts and the Army? The Boy Scouts have adult leadership." Still, that beret was a jaunty piece of head gear. I ripped the lining out of mine and wore it in the shower a few times until it molded to my head. I was not alone in doing this. I also had my fatigue trousers tapered and spent hours shining those jump boots 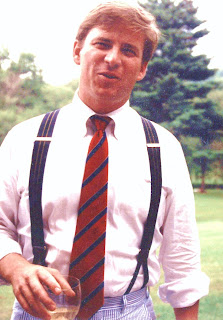 After college there was another uniform. Ivy, Trad, North American Traditional (NAT?), whatever you wanna call it - -I called it home. It was (and is) the prefect uniform for someone who doesn't have a uniform anymore. The picture above is at a friends wedding on the Main Line in the late 80s. I was wearing the Summer uniform. Seersucker suit, white bucks, argyle socks, rep tie and braces. I'm not saying it's the only thing to wear. I'm just saying it's simple. 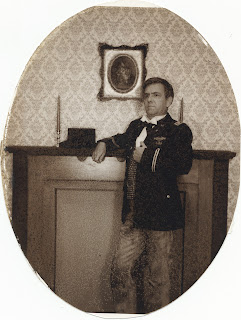 When my Grandmother asked for a retirement portrait of my father in his dress blues - - I don't think the above is what she had in mind. Olan Mills would have sufficed but as I've mentioned before--my old man is a bit out of the box. A genius. But out of the box. Still, he wore what meant the most to him and his career... his Combat Infantry Badge and Jump Wings rather than the three rows of medals - - some for brushing your teeth five days in a row. Of course, he never had a girlfriend paint his portrait. 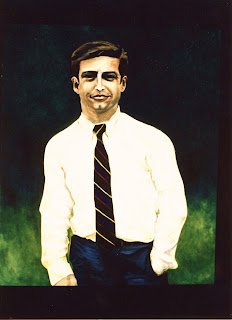 I miss uniforms. They made me feel like I belonged to whatever it was I was doing at the time. Cub Scouts, ROTC, Paratrooper, Deputy Sheriff, Park Ranger...even a salesman. Starched oxford cloth button down, pressed khakis, shell cordovan shoes, a navy blazer or suit...It's still about feeling a part of something. Whether you belong or not doesn't really matter.
Posted by tintin at 14:20

This is where I start gently kicking your ass about why you need to be thinking about writing a book, Mr. Tin. :-)

Well done!
What was your Army MOS?

Michael- You have a lot more faith in my writing than I do.

Richard- That was a 80's Brook's Bros shirt. The best roll ever.

East Village- 11Bravo2Papa. I tried hard for Sierra but didn't make it.

Tintin, I agree with Michael. You write a book, it's brilliant! Everyone will want a copy...You have such an enjoyable story to read.

Great post. A young lady one time years ago peered at my open closet from my bed and said "I can't believe you have so many suits..."

I was embarassed and only managed "it's just a uniform. we all love em.."

How true. For all the reasons you set out.
ML
mlanesepic.blogspot.com

PS. Do the book. I have great confidence in it.

That's exactly why I wear a jacket and tie to school. It makes me feel like Im really doing something, despite the fact that everyone else is in tier pajamas.

The book idea is up to you, but you are a hell of writer.

"It's...about feeling a part of something. Whether you belong or not doesn't really matter."

Some of the wisest words I've heard for some time.

TM- If you're who I think you are--stick to design and stay away from book titles.

tessa- thanks and stay away from TOPH. Love your directions to NYC.

Memphis- Thanks and please come back. I need the traffic!

Giussepe- Years ago I was asked why I was in a sport jacket and tie on casual Friday. It's something of a cliche now but I replied I was dressed casual. It's always fun to add, "Are you working on your car today?" Thanks for your compliment.

Old School- Thanks. I don't know where that came from.

Seems to me that if you don't belong, a uniform becomes a costume.

Great blog. The other day i was trying to recall the name of the clothing store across from Brooks on madison avenue that has since closed. It was on the eastside of the avenue; do you recall the name?

There were two. Chipp and Tripler. Chipp was on the ground floor and Tripler (bought by Hartmarx?) was on the 2nd and 3rd floor if I remember correctly. Paul Winston's father ran Chipp and Paul has a small bespoke shop with some of the great old Chipp ties, cumberbunds, vest...I think they were both on the south west side of Mad and across 44th St from Brooks and the old location of J Press.

I picked the right day for a first visit to your blog. I was researching uni's for a post at Blushing Hostess Entertains (I see we have some commenters in common already) and I tripped across you. My husband is a Naval officer, I think he would relate (if only I knew where he was to ask him - nature of the game, right?). Anyhow, from a dedicated femme trad hailing from old Bedford, I thank you for this blog. I will enjoy reading along with you. Be well, The Hostess

Blushing- Thanks for visiting. Glad you found me. Brats are brats. Navy, Army, Marines, Air Force... doesn't really matter. Wifes put up with the most. It's a tough road that civilians have little knowledge of. I look forward to going through the rest of your blog this weekend.

Me again. It took me a little while to figure out what you meant. Obviousy TOPH referred to my post on the book. "Directions to NYC" took me a bit of detective work. I think, perhaps, you confused me with Holly Goes Lightly who did not comment here but on a previous post. She's got this thing on her blog with maps and such. Anyway, that's not me. But I love that you thought I was her. Sort of like getting a kiss in the dark. By a stranger.

UGH! Drab green camofauge...too much of a bad thing your freshman year. Thank goodness you saw the light and changed your uniform! Thank goodness for honest friends!ME

Tessa- Whoops, you're right. My apologies. "Kissed in the dark by a stranger" is a helluva book title. If you don't want it I'm taking it.

ME- So true. Although I'm still wearing my field jacket.

It is yours for the taking...name a character after me?