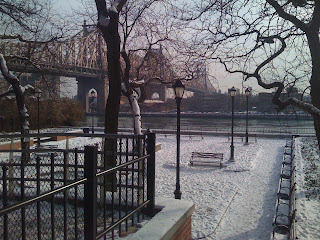 The East River at 57th Street. There's something about a bridge that makes me think of a journey.

A friend died this morning after a long fight with cancer. We both started work at a brokerage in Chicago on the same day in May of 1992. At the time I thought Dana was a light weight. As head of the small business unit he knew little to nothing about the technical side of our job. I worked on large commercial accounts and knew little to nothing about selling. Selling is where Dana excelled. Despite my looking down on Dana's knowledge - - he always treated me decently and with respect.

I watched Dana and two other friends take down a Chicago Icon. Our former boss. That businessman was all over pay-to-play Illinois politics. You've heard a little something about this phenomenon recently. Today that iconic Chicagoan is in jail and won't get out until after Obama's first term ends.

Dana had balls. That's for sure. He also had the kind of humor that was bodacious, intelligent and way off the reservation. Presenting to a client after getting whacked with a $10.00 haircut the day before - - he spoke no truer words, "My haircut is a good example of what can happen when you buy price."

At a Chicago Bull's game in a luxury box, both of us were so bored that while our clients oohed at Michael Jordan, we wiled away the time throwing cubed cheese at each other. We left the game early and Dana took me home in his new Infinity. I think he was prouder of his new ear muffs that stayed on like little suction cups than that car. A year or so later I heard of the cancer. He put up a long fight and a couple of years ago he had a party to celebrate his life. It was a massive blow out with some of Chicago's hardest drinking and partying I've ever seen and we all knew why we were there.

After the party broke up, Dana treated me to a late dinner with his girlfriend and a model. The model was young, tall and beautiful and I had no idea why she was so interested in me. All through dinner she told me about the cosmetic company she wanted to start. Dana was in tears laughing. When I called Dana the next morning he admitted to telling the model I was extremely sad over my divorce and my personal net worth was over fifty million dollars.

In the last 5 months Dana's health declined fast. I phoned him and for the first time he didn't return my call. We were co-workers who became friends. In the plain vanilla - white bread world of my profession he was a colorful and grateful man who feared no one, played it straight and always reminded me to lighten up and have fun. I'll never forget him or his laugh. My heart goes out to his family and his many friends.
Posted by tintin at 17:32

So sorry for the loss of your good friend. My husband and I lost a former coworker and friend last year to cancer. We both loved him dearly. My comment after his death was that I had a 30+ year non-sexual love affair. How we miss him so....
Cancer sucks....Always takes the good ones.....'Til we meet them again....

Beautiful tribute, Tin. My thoughts are with you, and with your friend Dana's loved ones, tonight.

ann- Thank you for your kind words.

Michael, Thank you. A welcome sight to see your name and I only wish everyone was able to see Dana.

John - I know how close you were and give you a hug of support if it will help the sorrow. I still recall several parties when Dana and I started talking. I came to value his take on things and turned to him for his thoughts.

He risked everything to do the right thing, he could laugh at himself and be delighted by just about anything. His legacy to me is "Go For It --- You Can't Lose That Way". ...Sandy

Sandy- Why am I trying to write anything when you've said it so well...as you always do.

Tintin, My sincerest condolences. Your tribute was warm and heartfelt. You are in my thoughts.

Here's to Dana. The shadows have claimed him, true. But his memory will shine bright through closed eyes.

HTJ- Thank you. I count you as an old friend whom I've never met and as a man who knows a town we both love and cherish.

Tessa- Thank you as well. Take no offense but no shadow took Dana. It was full blocking out of the sun.

Well done. I'm sorry for the loss of your friend.
ML

Thanks, M.
Dana was great guy who lived Epic...

G- I only wish I could hear him.

titin-as career and life take us all on different journeys, sadly, we can't help but lose touch with those that mean the most; yet they always seem to inspire us from afar. Dana was one of those rare souls. Thanks for keeping me in the loop. My heart is heavy today.

Sorry to hear about your loss. You penned a wonderful tribute.

Thanks for the compliment, Laguna. He was a special man. The courage and heart of of the best soldiers I ever knew.

Tin - He sounds very much like the kind of friend anyone might wish for. A very touching tribute, he was lucky too.

This is very touching.