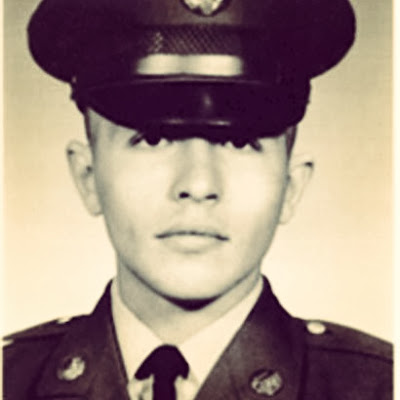 I occasionly get thrown into dark places by friends who know not what they do. Wallace Stroby emailed a MP 3 of Bruce Springsteen's, The Wall, which was released today and unknown to me even though it's been played at concerts for years. It is an intimate poem to Walter Cichon, lead singer of the mid-60s Jersey Shore band, The Motifs. Later, a drafted Army ShakeNBake NCO who served with the 4th Infantry Division and was killed in the Central Highlands in early '68.

Major Reed asked me to join him in his tent with Major Dunbar.  Reed had a 4th Infantry Division patch on his right shoulder from a tour of Vietnam in '67 and '68 as a young butter bar. Almost ten years later he was running the briefings for the corps commander and I was his starched up map pointer.  "Slap the map acetate, Tinseth…that way we'll keep these fuckers awake."

Walter was reported MIA but only because his body had been hacked up by the NVA.  His unit knew he had been killed but it was impossible to identify him -- This is Walter introducing the song and singing lead on "Molly," the B side of The Motif's first and only single.  I like it better than the A side because you really hear Walter's voice…deep and spooky but fun with some major attitude and a melody that that reminds me of Sexy Beast.  Walter, who had a truckful of talent, had damned little luck.

I applied to West Point Prep School and my acceptance was delivered to me by a mail clerk in the back of the briefing tent.  Prep school was for enlisted men who lacked the GPA to get into West Point.  My history and english were just barely adequate but  science and math were a mile deep in a shit hole.  I told Reed and he congratulated me.  I told him I wasn't sure.

A year of prep and four in the academy meant five years of payback to the Army.  "10 years of my life in boots." I told Reed looking at the dirt floor of the briefing tent and at Reed's spit shined boots. What I really knew?  I seriously doubted I could make it -- Even thru prep school.

In this video, Springsteen refers to a newspaper article about Cichon sent to him by a friend. I'm guessing it's this 1999 Asbury Park Press  piece that is so  beautiful.  Although Bruce gets the branch of service wrong in the song, everything else is on.  The Wall, after being played by Springsteen at concerts around the world, is finally being released today on, High Hopes.  It's not Veteran's Day or Memorial Day…it's just the right day.

I join Reed and Dunbar in their tent.  Reed asks for my canteen cup and pours three or four glugs of Usher's Green Stripe while Dunbar asks if I want soda or water. At 19, I've never had scotch -- only gin, bourbon or beer.  "Water," I say and Dunbar leans over from his cot with an OD green plastic canteen and shakes a short glug out while I wonder where the fucking soda could be.  Dunbar tells me he was a drama major at Northwestern.  I have a hard time associating this man with performing Shakespeare.

I ask Dunbar how a drama major winds up in the army.  Dunbar smiles, it's a warm smile on a big man with light brown hair that's cut high and tight.  Shaved sidewalls were not just a fad but had purpose in keeping hair out of head wounds. I see the actor in Dunbar.  Good looking, tall, loads of presence and charming.  I barely notice Reed is in the tent.  "I didn't think I could cut it," Dunbar says.  A lot of competition for a handful of jobs -- That, and I didn't really fit in."  "No shit," I thought.

The Ship's Wheel, Hoffman House, Mell's Lounge, Buckwalds, The Cave, Playpen, Stanley Prinston, Big Ray, Little Vinnie's... the list goes on… The Jersey Shore will always be more limited by what it could be than what it is -- Like its inhabitants.  And maybe Walter, if he lived, would've wound up as an insurance salesman.  Or, maybe… he would've been the leader of  a rock and roll band.

Both Reed and Dunbar argue for prep school.  A PFC drinking with two majors offering career advice was not lost on me.  A couple days later Reed offered me to a detail that was setting up the corp commander's mess.  The tent came with a hard wood floor and a small bar.  I stole a bottle of Johnny Walker and knocked on Reed's tent pole.  Reed's face lit up when I handed him the bottle. "Where'd you get this?" It will be the very first time but hardly the last in the Army when I say, "You don't wanna know, sir."

I will ignore Reed and Dunbar's advice mostly because I don't know or trust them.  For years it will sail across my horizon as a huge ship of regret, not that I think about it every day -- Only when I see a bottle of Green Stripe or hear about someone from the 4th Infantry Division.
Posted by tintin at 14:53

Late 70's I was at Tony Mart's in Somers Point Nj on the S. Jersey shore. The house band was playing and someone told me one of the guys had been in the Motifs in the 60's. I had never heard of either one.

I attended lacrosse camp at West Point early July of 1980. The lacrosse coach called me in September and said they wanted me to play for them and that I had the grades and they would arrange the Congressional appointment. I asked for a week to consider, it. Like you, I turned down the offer. Like you, I wonder what might have been and have a twinge of regret. Then I realize I would have been in a ditch in the desert in '91 in Kuwait. That is if I even made it through Beast barracks.

I find it hard to regret a path not taken because I tend to believe things work out the way they should. Could I have done bigger or better? Sure, but I would have ended up with a very different soul and intellect and oddly, less independence. It was a trade off I am satisfied with. I think it a great privilege in life to have "clean" hands.

Great, great post. Crossroads are always there for us and always a source of angst. If we are lucky enough to go one way at all. This fellow, like so many, got to a crossroad too early and didn't get to go either way.

I was in a deep Naval Academy phase when I was in junior high and after my dad took us on a surprise visit to Annapolis during the first couple of weeks of Plebe summer realized that not even my extreme love of the full dress uniform would carry me through. I do still think of it though. Nowadays mainly the thought that I would be retired by now.