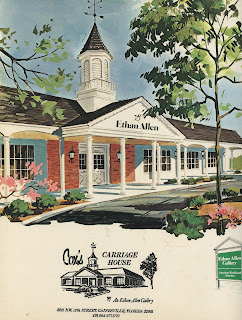 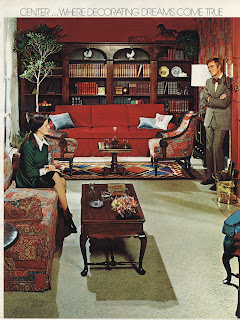 "Not as good as it was..."
Unless we're talking about 1974. When was it in the 70's that vulgar became such a popular choice? Nik Nik shirts, bozo the clown bow ties, leisure suits, harvest gold appliances, rust shag carpet, turquoise jewelry and the Pacer. I've often speculated the Soviets introduced an experimental drug via a popular U.S. soft drink. Instead of streets filled with our own citizens screaming, "Die capitalist war mongers!" we got Cheese. I assume the Soviets ran out of money and had to rush the drug into production and all of America fell in love with Ethan Allen and Kitsch.
I hear the company is in financial trouble. That's amazing. I'd have thought they went outta business 30 years ago.
I remember these living room suites growing up in the south. Wall to wall carpet with tiny, machine made Persian rugs scattered everywhere and a matching suite of furniture with art work bought from the same Ethan Allen store. A look sans any character or personality. As cold as the air conditioning in an Atlanta mall.
One thing concerns me...his suit. I swear those are hacking pockets on his suit jacket. A slanted pocket, it just happens to be a favorite detail of mine. I shudder at the thought but I drank a lot of Coca Cola in the 70's.
Posted by tintin at 18:17

Not to worry. The drink of choice was Tab.

Make that a Gremlin.

I was 5. I just remember a lot of avocado green on everything.

He looks like he could fly away with that tie/propeller.

I happen to like EA furniture, although I go for their French Country stuff. I think they still have one line left with the overdone cherry fake antique crap.

Strolling through an Ethan Allen store, I see, maybe, a dozen pieces I really like.

My wife fell in love with, and purchased, the Bentley club chair for our converted family room/library. It's not a bad chair for the price, it's very comfortable and the natural grain leather is excellent.

Tintin, You've been on a roll lately. Nice work. Yeah, that tie is worrisome. That fellow looks entirely too happy about it, but then maybe that's what those clown ties did for people. I had one as a wee lad in '75 and in the photo I look like I won the lottery. The glen check suit actually doesn't look too bad for the period; it isn't a brown suit with a burnt orange shirt and platform shoes. The room? Well, it doesn't have that other 1974 look, macrame plant hangers and framed marimekko fabric wall art. What it is missing is a "furniture television," you know the kind, in a wood case with doors that open in the front. I actually liked those. What I like better is a living room without a television.

mom on the run-
I like the Frecnh Country as well. The Gulf Foxtrot (girlfriend) and I snagged a nice piece from Pierre Duex last year for half off.

anon-
I recently strolled through the NYC E. Allen and was knocked over by the prices. They want $4,000 for a reproduction chest of drawers. Hell, you can buy a 18th C chest of drawers for half that.

HTJ- Triple Americano's. Sounds like you and MW had some laughs. Have you seen the Yumas yet? Why won't anyone tell me about the Yumas? I had a pimp chase me on Hays St. in Fayettville in platform shoes. His "girl" asked me for a date. I told her I'd pick her up at seven, take her to meet my mom and dad and then we'd go to a movie and have a slice of pizza afterwards. She didn't think it was funny and moments later her employer was running at me full tilt. I was wearing Adidas and left him some distance behind.

No worse than the imitation Scandinavian stuff that was all the vogue at the time.

Change the carpets and the upholstery and the look isn't bad at all. I rather like the coffee table in the forground, in fact.