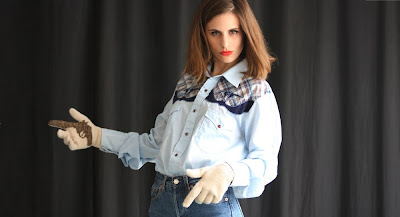 There's a spectacular restaurant in Paris within eye shot of the Eiffel Tower and while it's not much to look at, the food and wine are amazing. Only seven tables -- Only one seating a night. Vin Sur Vin or, "Twenty over Twenty," a French expression for, 'best of the best' is one of my favorite restaurants. But this isn't about a favorite  restaurant -- This is about a favorite web site, Striiiipes,  in which the owner, Arthur Lhermitte designs some of the most amazingly creative play things to wear. 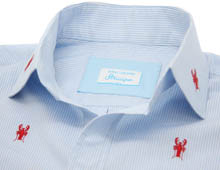 My favorite, and sadly gone for now, but who knows, is this lobster shirt. Perfect for explaining my favorite expression from Spain, 'Que Langosta' for a woman's rear end (Where's the sweetest lobster meat? In the tail). It wasn't cheap but I'd rather wear it more than anything else nowadays. With a little shouting maybe Arthur will bring it back. 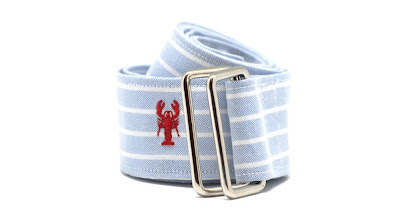 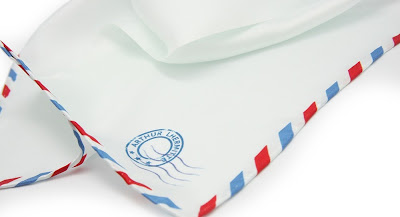 Not being a pocket square guy but unable to stop buying them -- Arthur's Air Mail pocket square connected me to my childhood and growing up with a military father and lots & lots of air mail envelopes. Mostly from Asia -- The paper was thin like a whisper and bordered in red, white and blue. I don't remember being excited by anything today as much as I was by seeing an air mail envelope with the old man's scratch on it.

Back in Paris, I remember having dinner at Vin Sur Vin and seeing an older couple in their 60s...he, with a huge head of grey hair over a DB navy blazer, rep tie and grey trousers -- She, silvered as well in a red knit St John the color of Georgia brick -- Neither, what you'd call in shape but happily exhibiting bread, butter and wine in their profiles...They are what I aspire to.

A pony tailed Englishman in a t shirt and his anemic blonde wife sat next to the older couple and when my hero ordered a second bottle of champagne, Pony Tail said laughingly, "You sure do drink a lot -- What are you celebrating?" I would've said, "My first blow job," but my hero did something I'll never forget. He turned and looked at Pony Tail... Held the look for at least five full seconds...and, without uttering a word, turned back to his companion. Pony Tail looked like a confused 12 year old. It was one of the most amazing things I've ever seen... 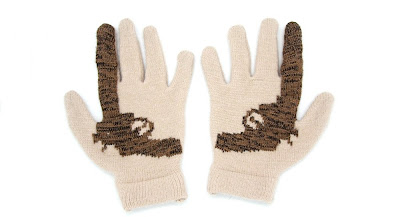 And so are these cashmere gun gloves. Jesus, when will someone hire me to write catalog copy...Probably not the most PC thing to don on the Upper East Side but, like my hero at Vin Sur Vin said, without saying a word, "Screw em." There are only five pair, and there's just one size but Mon Dieu, are they ballsy. There's not much to buy but there's a lot to love about Striiiipes. As the monster-huge retailers beat you over the head with the obvious -- It's always the small guy who whispers. 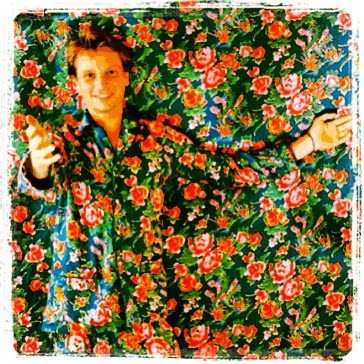 "As for the Striiiipes website, I created and launched it in September 2012.
The idea is to showcase new products (fashion design, product design...) that trigger imagination.
We try to select a wide variety of products from different designers.

As for me, I was studying in a business school in France, and had the opportunity to work and study in other countries (Netherlands, USA, China...). A few years ago I decided to learn about fashion design, at the Studio Berçot in Paris.

Working in the fashion industry since then, I created Striiiipes.com along with other projects.
It started as a hobby but rapidly grew into a success. I am now working on new products (accessories, apparel...), and looking for new designer who would showcase some of their products on Striiiipes.com

As for the next steps, we'll try to have more retailers throughout the world (we had a special collaboration with Selfridges in London, and in other concept stores in Europe).

As for my favorite restaurant, when I was living in Shanghai I used to have dinner at some really small restaurants on the side walk of the streets. Really small, not really clean but very good traditional Chinese food. I am now in Paris, when I have some time, I like to go to Angélina tearoom rue de Rivoli, and have a Mont-Blanc for an hour or two.

I hope I answered your questions, let me know if you need anything else."
Best,

Arthur Lhermitte
Posted by tintin at 12:55

What a fun story. I love that some guys have such a sense of self that not saying anything says everything they need to.

Tintin
You are back in fine form! I am enjoying these conversations you posted the last two days and even more, enjoying the heck out of your stories. I suspect the best writers listen well and also edit themselves well. And you surely do both. Hope good things are happening for you.
Douglas Webber

Fine piece. And I liked the story too. ME

Love your blog which I read faithfully. I wonder, however, about your translation of 'vin sur vin'. Unless I'm missing something, that should read 'wine over wine'. The French expression for 'twenty over twenty' should be 'vingt sur vingt', no? Or is there a play on words here that my French is just too poor to understand.

You are correct. Vin is wine.

Vingt is twenty. Sur has many meanings, the most common of which is "over." To the French, the expression "vingt sur vingt" means "twenty out of twenty." A perfect score.

The restaurant might be just that, but it is not named that way. Perhaps a sign of humility. One can only hope.

I love nothing more than public humiliation.

Anon- 10:18 - It was explained to me that it was a French play on words. And my apologies for not including that.

Anon 15:54 - Thank you for clearing that up. It was explained to me but frankly I was having a hard enough time wrapping my head around 20 over 20 is perfect. Cathy Treboux explained it to me once, French scoring or something like that...But I was too busy staring at her cleavage.