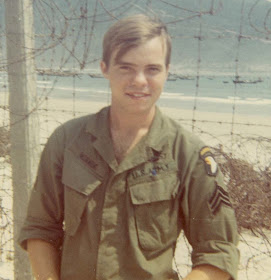 The History Channel airs "Vietnam In HD" this week on the 8th, 9th and 10th at 9PM. Last week I interviewed one of the thirteen voices of the documentary, Arthur Wiknik. Art also wrote 'Nam Sense' a memoir of his experience as a Shake & Bake squad leader in the 101st Airborne Division as well as a veteran of Hamburger Hill.

Question I understand you were in the 101st.

Q Where were you located?

A We were in I Corps which is the northern part of Vietnam.

Q The documentary footage is haunting. It really takes you back to that time.

A Yes it does. I was amazed at what they were able to find.

Q How did the producers find you, Art?

A Well, I believe they were looking for Hamburger Hill veterans and if you do a Google search for HH veterans it shows up. Part of that is because I wrote a book about my experience called Nam Sense.

Q When was your book published?

A It was published in 2005. It was a small run. A couple thousand. It came out in paperback shortly after that and sold out. It's in its third printing now. (book here)

Q Is the book available on Amazon?

A Yeah, and I have a web site as well. NamSense.com. (web site here)

Q Were you drafted or did you enlist?

A (Laughing) I did not enlist. I didn't want any part of the army. I was drafted. I graduated high school and took a year of automotive training. I was one of those guys who didn't like school and so I thought I'd take my chances with the draft. That was not a very smart move and I was drafted shortly after that.

Q What year were you drafted?

Q And were you an 11 Bravo? (Designation for infantryman)

A It was voluntary and I did not go to jump school.

A Well, what happened to me -- You got a lotta tape there?

A When I went in, I always liked to crack jokes and make people laugh and that's followed me all my life. When you first go in the army you fill out something called the "Dream Sheet." I don't know the formal term but that's what we called it. You put down what kind of skills you have in case there's something the military can use.

A So, he asks if I'm gonna take any culinary training when I get out and I said no...And he said, Well, you know what? You're going in the infantry. And that's how I got in. As a two year draftee, I was going in the infantry anyhow. I took basic at Ft Dix and infantry at Ft Polk. While I was at Ft Polk, they noticed...Well, I'm a very vocal guy and kind of a ham sometimes plus I had that one extra year of schooling and a lot of people didn't have that. So, they thought I'd make a great squad leader and they asked me if I wanted to go to Non Commissioned Officer Candidate School. I told them no because I don't want to be here...

They said I could stay in the states another six months and I said okay I'll do it (NCO Candidate School was six months long at Ft Benning). I'm thinking the war will be over by then. Maybe troop strength will be less. The war hadn't even peaked yet. I pretty much sealed my fate because that's where I was going to end up anyhow. So when I got to Vietnam and got off the plane...I don't know if you've heard of Shake & Bakes?

A I was a Shake & Bake. When I got there, we were moved over to the side and they said all you NCOs, these are the different units that need squad leaders. One of the people there said, "Sgt Wiknik, you're going in the 101st Airborne" and that's how I ended up in the airborne. I was just randomly picked.

Q I didn't know they had legs in airborne units back then.

A (laughing) At that time, there weren't a lot of guys who went to airborne training. A lot of us were legs. I'm glad you said that. Most people don't know what a leg is. If you say someone is a leg in an airborne unit they're not going to know what you're talking about. (disparaging army slang for a soldier, usually infantry, who are not airborne qualified).

Q Did they extend your time at all for being a Shake & Bake?

A No, I actually didn't even finish two years. I did like 22 months. By the time I did all my training and finished my tour I only had a couple months left and that wasn't enough time to assign me to a unit stateside.

What they did, just before I came home, they promoted me to E-6 (staff sergeant). I'm thinking, why would they do this to me 'cause I was always in trouble over there...with my superiors...I had a little problem with keeping my mouth shut. I never got busted but uh, I was in trouble quite a bit.

A few years ago I got an email from my old captain and I asked him why he would ever promote me...He said 'cause we wanted you to stay in. I said, me? (laughing) After all the havoc I gave the lieutenants. He said, "Yeah, most of the time you were right." I'm thinking, great, great, now you tell me."

Q So you got out as a staff sergeant?

Q Understanding you were a reluctant draftee -- is there anything about the army you miss?

A That I miss?

A Uh, I'd have to say no. (Laughing) I absolutely hated it. When I think back though -- Now that I'm older and can reflect back on my life.... it's probably one of the better things that happened to me as a young man. It put some regimen in my life. It taught me team work. It also taught me how to act on my own. Be quick on my feet. So, it did a lot for me. It was really a great experience but when you're going through it at the time -- Especially war time -- It's not very pleasant.

Q Have you see the documentary yet?

A I saw a rough cut of my episode.

Q What did you think of it?

A It was a rough cut so some of the footage was a little blurry. There were a couple small errors with dates and things like that but this is all minor stuff. Honestly, I love it. Not because it's me but because it's about us. It's about my generation of warriors. We're finally being recognized in a way that's different. It's our voices. Our feelings. Our emotions. That's what I really like about it.

Q What did you do when you got home from Vietnam?

A Well, one of the things I wanted to do was talk about the war but no one was interested. It was an unpopular war and, unfortunately, people took a lot of it out on us instead of going after the government. I had so much to tell. I wanted people to know what it was like. And I did nothing I was ashamed of. I served honorably and didn't bring any shame to my unit or my family but nobody wanted to hear it.

A What had happened to me was, I kept telling people my stories and eventually some people thought the stories were funny or interesting. Before I knew it, people were asking me questions and that's when I knew I was going to write my book. Because now there was genuine interest. At least among my friends. As time went by...especially after the first Gulf War or, going into the first Gulf War, I think the American people realized they had made a mistake in the treatment of Vietnam veterans.

Q Do you see any similarities between Vietnam and our inability to win the hearts and minds with today's mission in Afghanistan?

The other thing too -- I've already done my war. I have a deep admiration for the men and women today. They're doing something I would never have done and that's volunteer. I don't follow those wars as much as I did my war. I don't know why I don't. I just don't.

Q My father, for a very long time, could be cold in his combat recollections of Vietnam. He's 75 now and I've seen that change in just the last five years. He's not doing well, at all, with his memories of the war.

A When you see my episode (excerpt from Wiknik's episode) you'll see I've become quite emotional. Three or four years ago that never happened to me. As you get older you reflect more. I always think what my parents went through but I think even more about the parents of the kids who never came home. They're still living with that loss. All this stuff starts to affect me and I become very emotional when I start to think about it.

One other thing that people don't think about -- When you're in a war zone it's all about survival. You gotta help your buddies, when and if you can, but most people want to keep themselves alive and if it's somebody next to you who gets killed or wounded, you just go, "Whew, glad that wasn't me."

You try not to show any emotion and lock all that inside you. Then, it's such a relief to get out of there, you just want to put it all in the back of your mind and never think of it again. But, as you get older, those thoughts are coming out and you start to reflect on all this and you realize, "My God, we never had a wake, never a funeral. When someone dies stateside you have a way to say goodbye. Over there... you didn't say goodbye to anybody.